Underrated Movie #4: Two for the Road

The Story: A quarrelling English couple, flying to Paris, are overwhelmed by jumbled-up memories of five previous trips across the continent, back when they were broke and happy.

How it Came to be Underrated: Donen’s musicals were so great, right out of the gate, that his later, more humanistic work was seen as a disappointment at the time. So many directors who had been ahead of their time in the '50s found themselves left behind by the '60s (think Hitchcock), but Donen had the opposite problem—he embraced the sixties too fully and alienated his audience. As a result, we are still belatedly realizing how ambitious and smart his non-musicals were.

Underrated Compared To: It towers above such terrible late-Hepburn movies as Paris When it Sizzles and How to Steal a Million, but I would argue that it even stands up to Donen’s best, like Singing in the Rain and On the Town.

If You Like This, You Should Also Check Out: All of Donen’s ‘60s films are well-worth seeing, especially Charade and Bedazzled.

How Available Is It?: It’s on Netflix on DVD and watch instantly, in its proper aspect ratio, I’m happy to say.

Today’s Post Was Brought To You By: The Fearless, Fabulous Females of Women's Lib! 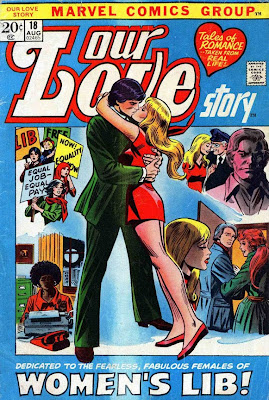 I so remember going to see this film in 1967 at the height of my Francophilia. I was 20. It was shown in the Odeon chain in my then hometown of Brighton on the Sussex Coast in the UK. A town annually invaded in the summer by French students, hence the burgeoning romance with all things French. I was illustrating Le Grand Meaulnes at art school and was unaware of the cynical edges of the script and saw instead only the beauty of Miss Hepburn, the stylishness of her clothes, and their enviable trip through a France drenched in summer down to the south and those sophisticated parties, sigh. A great film and a great choice. Thank you
Best Ian

Matt,
Hi. We met briefly at a Kidlit Drinks night. Congratulations on your blog. Two for the Road fits the list perfectly.
My reactions to the film are similar to "Ian's". I saw it first at the Greenwich Library (CT) Friday Night Films in the late 1970's. I was captivated by Audrey Hepburn and by the fun that the director was having, including what I remember as a sideways cut between two phone booths. I saw it again on New Year's eve twenty years later, and then I noticed a sadness and sharp edge to some of the scenes that I hadn't seen before.
Good luck with the blog. You've got me thinking that if you and EB can do this, maybe I should give it a shot, too.
Best wishes -- Greg Holch