The Story: An go-getter hotel manager meets a charming man on a red eye flight. Then he tells her she has to help him kill the Secretary of Defense or he’ll kill her father. Tension ensues.

How it Came to be Underrated: This should have been a big hit, and it should have provided the big breakthroughs that McAdams and Murphy were waiting for, but it just went whiff. It didn’t help that a superficially similar movie with bigger stars and a bigger budget, Flightplan, opened at the same time.

Underrated Compared To: Have I mentioned Flightplan? It was really bad.

If You Like This, You Should Also Check Out: Would you be surprised to hear that Craven’s first mainstream thriller, Scream, has actually aged well? Ah, but it has! Also, McAdams won my everlasting admiration on the brilliant, short Canadian TV series “Slings and Arrows”, so I won’t miss a chance to recommend that.

How Available Is It?: It’s on dvd, but not instantly.

Today’s Post Was Brought To You By: The Weird World of Aurora! 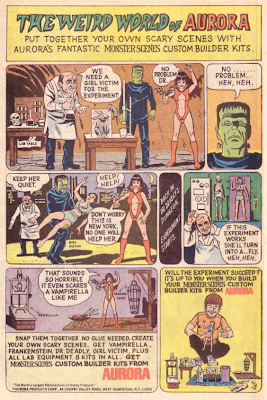 (Yes, they actually sold a “Girl Victim” model. Now is the time for your tears.)

Hey Matt, cool blog - I visited because of Monica's link. I like the painting on your header - what is the source? P.S. Walkabout is also an awesome film because it features a wombat, my favorite animal.

Thanks for visiting, B Tisel!

The painting is "New York Movie" by Edward Hopper.

After placing this on my watchlist ages ago because of this blog post, I finally watched Red Eye tonight; you did not steer me wrong (likewise with Below). I just thought I'd add another "runner" - the renovations being done to the father's house seeds a reference to how McAdams' room isn't being altered - not an especially important piece of information, but when she declares "not in my house" near the climax, we in the audience recall her room isn't being renovated, so we expect her to hold an advantage over Murphy - and she does.

Thank you for this series of posts, I've watched maybe half of them so far.