The Expanded Ultimate Story Checklist: By the time the final quarter of the story begins (if not long before), has your hero switched to being proactive instead of reactive?

Eventually you realize you can’t solve your problems without getting in the driver’s seat.
While this is the latest possible moment for the hero to turn proactive, I should emphasize that it’s also fine for the hero to become proactive, starting way back when the hero commits or at any point in between.
This is usually considered the one unbreakable rule of fiction, but there are rare exceptions: The hero of Witness never becomes proactive, and the hero of Raiders of the Lost Ark suddenly becomes totally passive. (He decides to follow that old bumper sticker’s advice: “Let Go and Let God.”) The first cut of The Terminator included a proactive turn, but it was cut out in the editing room to speed up the movie. (Originally, they were on their way to blow up Skynet’s future manufacturing plant when the robot caught up with them, but that decision was cut out of the final version, so that storyline became the basis for Terminator 2.) Because the movie is so exciting, the audience doesn’t care that the heroes never become proactive.

In very rare cases, it can be heroic not to go on the offensive: The dad in Kramer vs. Kramer could redouble his efforts when he loses his custody case, but he decides it would be too hard on his son. When his wife relents and surrenders custody anyway, it feels like he earned it by not fighting. Likewise, in Sideways, Miles simply waits for Mya to call him at this point, but because he has a history of hostile drunk dialing, it seems heroic for him to summon up the patience to wait for her call.
Straying from the Party Line: The “Passive” Protagonist of The Farewell 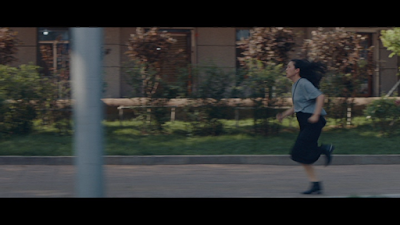 There were many Western ways for The Farewell to end:
In each case, this would happen around the ¾ point, and the fallout from the lie coming out would supply the drama for the final quarter of the film. I was fairly sure that one of these would happen. But I thought of one more possibility:
As we moved along, I started to think that was the most likely.

But then we get to the actual ending: Billi agrees to go along with the deception, and leaves without the truth ever coming out, and Nai Nai never gives any real hint that she knows the truth. The ending card implies that Nai Nai never found out and survived because of that.

This totally breaks our western rules of “big lie” storytelling. Big lies must come out! Once the rock has been rolled uphill, it must be released, come barreling back down and knock everybody flat.

Wang is defiantly refusing to give us what we expect and demand. This is the same conflict Billi has with her family. Wang is saying to us, “That’s the confrontational American way of doing things and you’re sure that it’s the only way, but there’s a gentler Chinese way, and our way can work better than your way, if you just learn to go with the flow.” No confrontation, no narrative climax, no release.

And the scene at the climax where Billi must run across town to forge a new medical report before the end of the wedding is absolutely crucial. Suddenly, she must improvise and actively participate in the plan to do nothing. She must act to maintain her lack of action. The ending would feel like a much bigger fizzle if she had not been forced into action like that, showing that she’d switched sides definitively.
Straying From the Party Line: The Passive Protagonist in Bridesmaids
Straying from the Party Line: Do the Right Thing's Passive Protagonist That’s Not Solving a Large Problem! 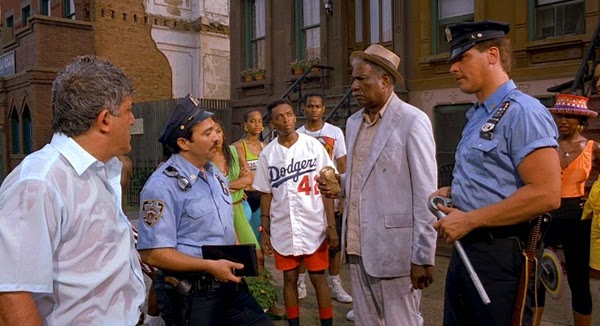 So finally we’ve captured that elusive beast: a great movie with a passive protagonist. In face, we have sometime even more rare: a great movie that’s not about the solving of a large problem!

Let’s start with our hapless hero Mookie, and all the ways he deviates from our list:
There is indeed a moment in just about the right spot where Mookie takes responsibility for a problem: 18 minutes in, he quickly shuts down Buggin’ Out’s first calls for a boycott, ushers him out, lectures him, and then Mookie comes back in and promises Sal that he’ll keep Buggin’ Out away from the pizza place.

So that sounds about right, and indeed this problem will get larger and larger, but Mookie himself will not do much of anything to solve that problem until it suddenly gets out of hand, more than an hour of screentime later.

(There is one scene about halfway through in which Mookie mildly repeats his advice to Buggin’ Out, but he actually makes the problem worse, because he also confirms Buggin’s worst fear by noticing that Buggin’s “Jordans are dogged”. He doesn’t suspect that the ruining of Buggin’s Air Jordans by a white homeowner on the block is by this point the real source of Buggin’s mounting anger.)

Meanwhile, Mookie skips most of the steps that we expect to see a hero go through:
So does the movie get away with all of this? Absolutely! Let’s break it down...

First of all, why doesn’t Mookie’s passivity infuriate us?
But this still leaves the question: why do we put up with it? There’s a good reasons why most stories are about active protagonists solving large problems: Because that’s how we’re primed to watch stories. Our first instinct is to invest our identification in one character, caring only about that character, and only caring about the story to the extent that we care about the character. This is the easiest way to tell a story and the easiest way to read or watch a story.

This movie asks a lot more of us. It asks us to jump around, and never plant ourselves too firmly in any one character’s shoes. This makes it harder to care, but Lee and his collaborators know how to compensate for this lack of a comfort zone:
So why doesn’t it deflate the movie that nobody is trying to solve anything? I would say that we are somewhat aware as we watch that our narrative expectations are being frustrated, but we go along with it simply because we trust the filmmakers. Every aspect of the filmmaking is so good that we know we’re in safe hands, and we give the movie a reluctant benefit of the doubt until everything finally coalesces in a very satisfying way at the climax.
Posted by Matt Bird at 10:30 AM