Steve and Matt Bird · 001 Marvel Reread Club Nov 1961
Hey, everybody, big news! Today marks the debut of my second podcast! (Don’t worry, the “Secrets of Story Podcast” will continue unabated, but it will now share space with this one.)

My wife has two podcasts, one of which is with her sister, and I’m following in her footsteps, because this second podcast is with my brother Steve!  He was an inker for DC Comics for many years and literally knows the comics world inside and out.
“Marvel Reread Club” will consist of us rereading every single Marvel superhero comic, starting with the beginning of the Marvel Age, one month at a time, and having fun discussing them. Most episodes will feature multiple comics, but for this first episode, we’ll just discuss the only Marvel comic to come out in November, 1961: Fantastic Four #1!

How should one listen to this podcast? We’re hoping to make it enjoyable whether or not you’ve read these comics. Have we succeeded? That’s up to you to answer! If you do want to read along, then get yourself a Marvel Unlimited subscription. Fair warning: This podcast is certainly more niche than “The Secrets of Story”. If this topic doesn’t interest you, just ignore these posts and I promise I’ll still give you lots of other content on this blog.

We hope you like it! We’re still finding our footing, and will continue to do so. Unlike my other podcast, which is on a monthly-or-so schedule, we will actually be releasing this one weekly, at least for a while, every Wednesday (aka, New Comics Day!) We’ve got two more episodes in the can for the next two weeks!

We may spin off into our own website eventually, but for now we’re just going to squeeze ourselves in with the other content on secretsofstory.com. After all, a lot of story secrets will be discussed!

Okay, folks, give it a listen if you’re interested and let us know what you think! 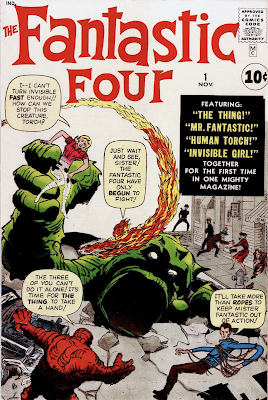 So glad you liked it!

Ah, early Marvel. Love it. I too can talk about them until my head rolls off of my neck and clonks into a corner of the room. After which it will still be yammering about the change Romita brought to Spider-Man and the rapid evolution of the Hulk. Rich material for fun yammering. I'm looking forward to the series.

I'm sure you'll bring it up later, but I gotta mention it now: the FF started off as a curious fusion of Marvel's monster comics and the work Kirby had just been doing at DC, "The Challengers of the Unknown." The Challs were a quartet of non-powered heroes consisting of a Smart Guy, a Big Guy, a Young Hothead, and a Daring Pilot. They wore matching jumpsuits, had a super-science HQ and a crazy jet, and got into adventures around the world investigating mysterious doings. Challengers comics were not particularly great - you can get insights into what Stan brought to the series by comparing the teams.

I looked up "Steve Bird" on the Great Comics Database and dang: you worked on Hard Time? A great series that died way, way too soon.

Also, in Episode Two, please tell me you mention what happened to those three earth-marooned Skrulls later on, as revealed in 1995...

We have two more episodes in the can and have not mentioned the Challengers of the Unknown yet! We're recording our fourth episode tomorrow night and maybe it would be an appropriate time to mention it, because we'll be covering the introduction of Thor and of course Kirby had introduced his own version of Thor in the 50s, too, lending credence to his claims that he had all these concepts ready to go before Stan Lee got involved (though I certainly think he was overstating his case when he claimed that.) Yes, the many future adventures of the three cow-skrulls are mentioned in the second episode.