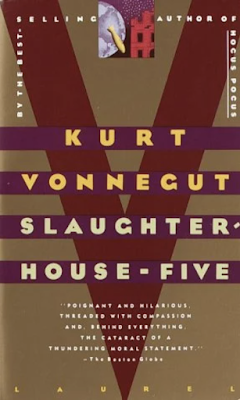 In the first chapter, Vonnegut tells us that this is a mostly true story and he was actually there for the bombing of Dresden. The second chapter introduces us to Vonnegut’s alter ego Billy Pilgrim, who is convinced that he’s unstuck in time, and has been abducted and put in an alien zoo, in addition to his own experiences in Dresden. In the war flashbacks, he has to deal with a psychotic fellow soldier named Roland Weary.
Why Billy might be hard to identify with: The first chapter gets us to invest in Vonnegut, not Billy, then it’s a little awkward to shift to the fictional character. Once we meet Billy, we never really believe his perceptions: He’s got PTSD from the bombing and he’s recently had a head injury from a plane crash. In the Dresden flashbacks, he stresses that he was totally incompetent, which usually keeps us from liking a hero. Even worse, he “wouldn’t do anything to save himself.” Traditionally this makes heroes pretty hard to care for, but Billy is an exception. I think it has something to do with the recurring phrase “So it goes”. The book gets us into a different, more philosophical mood, admiring the character who is learning to let himself be carried along by events, and despising the character fighting so hard against the Nazis with his own weaponry