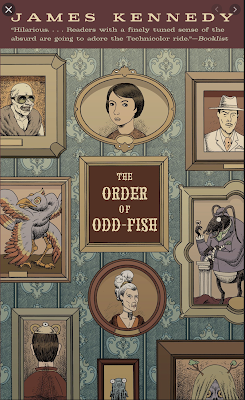 Faded Hollywood starlet Lily Larouche throws a blow-out Christmas costume party at her palace in the desert. Thirteen years ago, she found a baby in her laundry room with a note saying “This is Jo. Please take care of her. But beware. This is a DANGEROUS baby”. Now Jo is the responsible take care of her “aunt”. A mysterious Russian named Korsakov gets in a dust-up with a teen in a hedge-hog costume, who comes back with a gun. A package from the sky lands on the teen’s head and he accidentally shoots Korsakov. The package says “to: jo larouche, from: the order of odd-fish”
Why Jo might be hard to identify with: It’s always a little tricky having a hero who wants to shut the party down. Certainly we get the sense that Jo is not James’s own favorite character. But the three authors that seem to be the biggest inspirations here, Dahl, Juster, and Adams, all have in some of their biggest books party-poooperish heroes surrounded by wilder, more fun-loving characters. (Matilda is an exception)

I picked up a copy of this recently out of love for the blog and podcast, but haven’t had a chance to read it yet. It’s just jumped to the top of the pile!