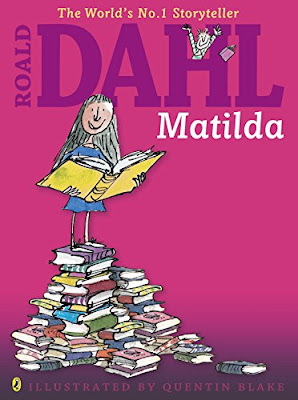 4 year old Matilda lives with awful parents who just want her to watch TV, but she discovers a precocious love of books and spends all day at the library reading, first all the kids books and then adult books. Soon she decides that her parents are awful (“If only they would read a little Dickens or Kipling they would soon discover there was more to life than cheating people and watching television.”) and begins playing sadistic tricks on them, supergluing her father’s hat to his head.

Why Matilda might be hard to identify with: We’re not married to her POV. We flit from head to head, including in Dahl’s, who begins the book by talking about how if he was a teacher, he’d say horribly belittling things to the kids. Then the book begins and Matilda’s parents sound a lot like Dahl when they talk to their daughter! To bond with Matilda, we have to say, “I like my hero more than my omniscient narrator.”

Believe
Care
Invest
Strength/Flaw: Brilliant / Not much of a flaw. What do you say, do you see a flaw?
Posted by Matt Bird at 10:30 AM

Hi. Im loving the 10:30s - as for common books, I think Anne of Green Gables is in there with Matilda and most people know it. I found it too harrowing a read when I was 8 or 10 but eventually got through it. Thanks

Another book that I loved was Moby Dick and the movie remains one of my favourites, with Gregory Peck. Standing on the dock, debating whether to go back with the silent women to safety or hop on board with these guys still resonates with me.

I've never read Anne of Green Gables, nor seen any of the adaptations, believe it or not! Moby Dick is a great suggestion. Maybe my favorite first page ever.

I loved Anne of Green Gables. It's a book that is still rewarding as an adult, because there are layers in the book that are only accessible to an adult. For example, Anne does not often talk directly about her backstory, so a child can ignore that (or maybe only feel it subconsciously), but, as an adult, I can see how that backstory feeds into the book's emotional and thematic power. I would suggest you stay away from the adaptations because I think they get the book wrong.

Another children's book with wonderful adult layers is The Wheel on the School by Meindert de Jong.