Examples Needed: Have them be witty 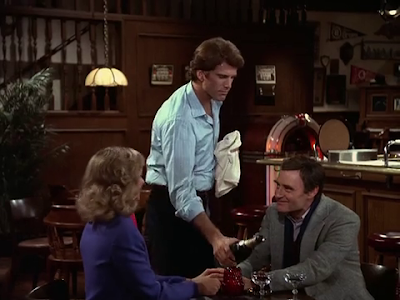 Okay guys, this may be the last one.
I realize that yesterday it was fairly ridiculous that I couldn’t come up with any good examples of heroes being confident. Thank you so much for your excellent suggestions in the comments. Well, today, it’s even more ridiculous: I can’t think of any good examples of any hero being witty in the beginning of a story! This is insane. My brain has melted.

The two examples I have aren’t very good: After seducing the reporter that was trying to write a damning profile of him, Tony in Iron Man explains to Rhodey why he was late: “I was doing a piece for Vanity Fair”. That’s funny, but it’s also cruder than I’d prefer.

In the “Cheers” pilot. Sam has to endure Diane quoting a long poetry verse. She then smiles and says, “That’s Donne.” He smiles back and says, “I certainly hope so.” The problem with this is that I’m not sure whether Sam is making a joke or not. Does he know that Donne is the name of a poet, or does he actually think she’s just said “That’s done”? I don’t know! So that’s not a good example either.

Obviously there are thousands of examples of a witty line I can quote from when we first meet a character, but my brain is fried! Can you help me out?
Posted by Matt Bird at 10:30 AM

I'm not sure that this counts as witty but I immediately thought of Lady Susan from my favorite Austen adaptation "Love and Friendship". Her meaning is always so different from the words she says that you feel like you're always running 5 steps behind in understanding her.

For example when she says something like "I pray that your husband's next illness has a more hopeful result" She sounds like she's hoping for his good health but she's really wishing for him to die. She's the villain but she's so much smarter than everyone else that you can't help but admire her and watching everyone else get lost in her conversational labyrinths is part of that.

It must be a bias on my part but when I try to think of witty characters I can only seem to remember British movies (Alec Guinness to Hugh Grant) and animated movies (Fanastic Mr. Fox).

How about Jimmy Stewart and Thelma Ritter in "Rear Window"?

But "Veep" is more of a "laugh at" show, right? I want it to be clear we're "laughing with"

James Bond's puns when he kills someone. Or Schwarzenegger's.

Stark has lots of other witty lines like:
Steve Rogers/Captain America: Big man in a suit of armour, take that away, what are you?
Tony Stark/Iron Man: Genius, billionaire, playboy, philanthropist.
The Avengers

Christine Everheart: You’ve been called the Da Vinci of our time. What do you say to that?
Tony Stark: Absolutely ridiculous. I don’t paint.


And Ms. Maizel has a bunch of good ones:
“Midge: I am not a prostitute. I’m a comic.

Rose: Is there a difference?

Not sure this counts as witty, maybe its something else, but in the 2018 film "Green Book" (i know people have some issues with this movie), bouncer Tony Lip (Viggo Mortenson) is driving home after his night shift at the club, at which he got into a fist fight to get a nice tip from a mob boss. He finds a parking spot in front of his family's home, but it has a fire hydrant. Clearly tired, he grabs an empty trash can and throws it on top of the hydrant!

It's a great moment, and, interestingly, it's a character scene that doesn't advance the plot.

Also later at a family meal, if you're paying attention, you see he dips his bread in wine and takes a bite. Now this moment certainly isn't witty but is a believable detail.

Melville said...
This comment has been removed by the author.
7:34 AM

Thank you guys all so much. For many of these though, I've never seen it or have seen it in 30 years and don't remember it. I feel like the perfect line is still out there. Something intentionally witty said out loud by the hero to another character. I'm driving myself insane. Thanks so much for your help!

A few thoughts for you on witty opening lines:

(1) The opening monologue in Spider-Man: Into the Spider-Verse.

Peter Parker / Spiderman introduces himself in a very witty way, including "Look, I'm a comic book, I'm a cereal – Did a Christmas album. I have an excellent theme song. And a . . . so-so popsicle."

Here's a link to the scene on Youtube: https://www.youtube.com/watch?v=dgRcMtZ0g2Q&ab_channel=FandangoNOWExtras

The client is so upset – he goes to the window and kind of clings to the blinds.

Gittes says (his first line): "All right, enough is enough -- you can't eat the Venetian blinds, Curly. I just had 'em installed on Wednesday."

(3) North by Northwest opens with Cary Grant dictating to his secretary as they walk. He's very flip (of course he is) and arguably witty.

When his secretary complains about walking, he says, "Use your blood sugar. Come on."

Men In Black, chase scene in the beginning:

Will Smith jumps onto an open top sightseeing bus.

WS: "It just be raining black people in New York."

WS while arresting the guy: (showing his badge) You see this? NYPD - means I will knock your punkass down.