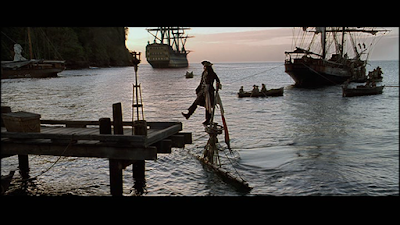 Well, guys, I feel we still haven’t found the perfect witty line from the first ten minutes uttered by the hero, so if you could keep those suggestions coming in, I’d appreciate it! In the meantime:
Young Elizabeth Swann sails from England to the Caribbean with her father. They come across a burning shipwreck and rescue a boy, Will Turner. Cut to ten years later. Will is now a swordmaker delivering a sword to Elizabeth’s father. Her father wants to gift both the sword and Elizabeth to the local Commodore. Meanwhile pirate Jack Sparrow arrives in town in a sinking ship. He tries to steal a new ship, but has to save Elizabeth, who has fainted and fallen in the water. Jack is caught as a result, but gets away. He goes to Will’s shop to steal a sword, and they end up having a sword fight.

Why Elizabeth might be hard to identify with: Looks pretty gorgeous in her sleep. And because it’s not clear who the hero is.

Believe
Care
Invest
Strength Flaw: Booksmart about pirates / naïve about life, love, and the reality of pirates
Will Turner

Why Jack might be hard to identify with: He’s almost too bizarre to be believable, and we’re not sure who the hero is.

How about The King's Speech for witty beginnings? The King stutters " waiting for me to ... commence a conversation, one can....wait rather a long.... wait" and other self-deprecating one-liners. The therapist responds at one point "what are friends for?" and the King replies "I wouldn't know" I also think Juno might qualify - when her high-school friend describes her as "convex" she replies "Wow, like someone's doing their geometry homework for once" and other teen humour. (I'm trying) Thanks