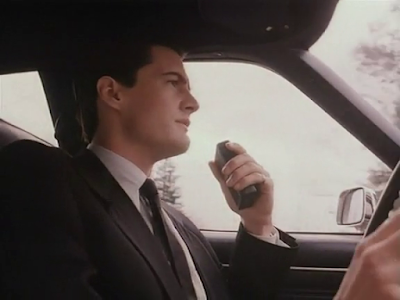 In the first 34 minutes of this episode, one girl is found dead by the edge of a lake. After we’ve seen the whole town process this, another girl, unable to speak, enters town across a railroad bridge that crosses state lines. That brings in the FBI.
Why Agent Cooper might be hard to identify with: We don’t meet him until 34 minutes into the pilot! After that, he seems a little tetched.

Believe
Care
Invest
Strength / Flaw: Enthusiastic detective / Over-enthusiastic about everything, in an unsettling way.
Posted by Matt Bird at 10:30 AM

Like Luke Skywalker, a late-entering protagonist! It's a daring move but it pays off. The late-entering protagonist works in both because in neither case is the story just about the main character, it's about the rich, textured world in which they operate. Only by clearly establishing that world on its own terms, without the hero hanging around making it all about him, does the world have sufficient reality. You also see this in the Gormenghast series, if I recall correctly. What are some other stories with late-arriving protagonists?

I can't think of any longer than those two. I think Rick appears 9 minutes into Casablanca. T'Challa shows up 7 minutes into Black Panther.