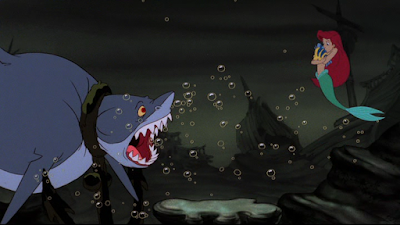 Sailors on the sea tell a young man about the mermaids below. Then we meet some merpeople having a concert, but the one who is supposed to be making her debut isn’t there. Instead, we meet Ariel as she searches a shipwreck for human artifacts with her friend Flounder the fish. She finds a fork and a pipe. When a shark chases her, she goes back to get the objects, putting herself in more danger. She tricks the shark into getting its head stuck in an anchor. Then she shows her friend Scuttle the bird the objects, and he makes up lies about what they do. She remembers the concert and goes back to get yelled at by her father. Meanwhile, we meet Urusula the sea-witch who is plotting against her.
Why Ariel might be hard to identify with: No reason. She’s adorable.

Interesting. As a woman, I did not find Ariel adorable initially. My girlfriends and I agreed she was annoying and selfish. She didn't just forget about missing the concerts, she was in the habit of missing them because she didn't respect her father, her family, or her community. She also did not appreciate her beautiful voice or the advantage it gave her with her father compared with her sisters. I thought it was poetic justice that her voice was what the prince was drawn to and that it was also what she had to give up to get legs. Glad she didn't turn into sea-foam though. Love your points about her objects and totally agree with that. My favorite moment is when she uses the fork in her hair... in front of the prince. (Is that real? That's a long-ago memory...) My favorite Disney princess is Mulan but I think that is an uncommon choice.

Keep 'em coming, I read them every day.

Huh, that's interesting. I've always found her utterly endearing, at least in the beginning, though it becomes annoying later on that she's willing to give up everything for this guy she barely knows. Yes, that fork in the hair moment is in the movie and it's adorable. But I can see what you're saying that she could be seen as off-puttingly selfish / over-privileged right from the beginning. I guess you could say that her big flaw in the movie is that she's willing to give up her voice, but she's already sort of "giving away her voice" by not showing up for her song recital at the beginning.

Yeah that makes sense. Something like: powerful voice/gives it away, or something like that. I'm thinking as an audience member, not as a writer, so I don't know how it translates into your writerly machinery.

Another reason why it might be hard to identify with Ariel: she's a fish.