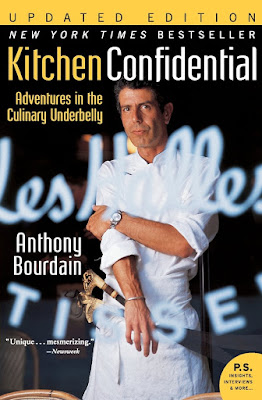 New York Chef Bourdain begins by directly addressing us, promising to dish secrets that will shock us about the restaurant business. He implies that he’s a rough, tough, outlaw type of guy (“If I need a favor at four o'clock in the morning, whether it's a quick loan, a shoulder to cry on, a sleeping pill, bail money, or just someone to pick me up in a car in a bad neighborhood in the driving rain, I'm definitely not calling up a fellow writer.”) but then tells us about his wealthy childhood, vacationing in France, where he discovers his love of food.
Why Bourdain might be hard to identify with: Suddenly, he’s sailing to Europe in “cruise ware” to “summer” in France! I quit reading there the first time I tried to read the book. When I tried again, I kept reading and discovered that a few pages later, he calls himself “a sullen, moody, difficult little bastard,” which is annoying enough with average kids, but even more off-putting in rich kids.


Yes,having read this book, when the show came out on CNN, I felt like I was catching up with an old friend I used to party with who had somewhat cleaned up his act, but was still my old buddy I remembered from Kitchen Confidential. I don't even remember how long ago I read it, but I immediately flashed on the burn in the kitchen scene when I saw that was your book for the day. Enjoyed your observations!