Big news: A great podcast network has offered to host and monetize us (in a non-annoying way!  Full announcement to come later). James said he was on board with the conditions that we finally change the music and the art, both of which he has long kvetched about. I have a great composer composing new music for us as we speak. As for art, James wants something that acknowledges his existence. As always, I thought I might involve you in the process!
As you’ll recall, here’s the current art, which is just a square version of the cover of my book: 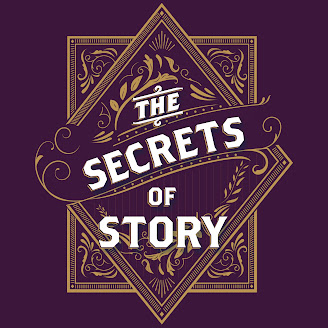 James worked this up at one point, which is fun, but I thought it was too busy: 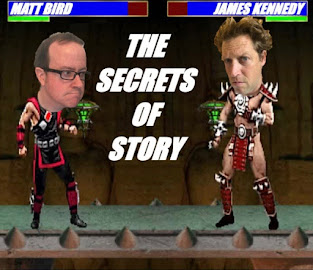 So for this new opportunity, I starting working on a vastly simplified version of the above, and got as far as doing this: 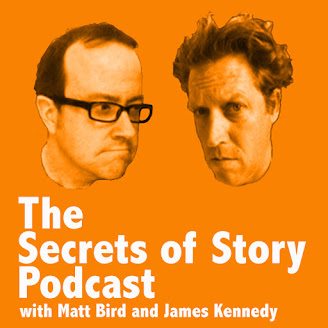 But then I sighed in exhaustion. The artifacting around our heads just looks too amateurish, our necks end too awkwardly, etc. It’s just not good. James said he really wanted actual art, like this Harmontown art: 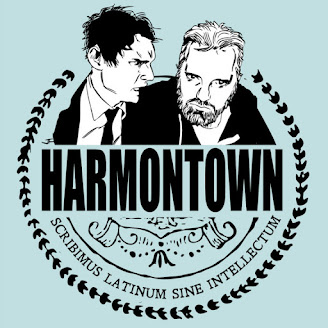 So, in a fit of desperation, I just drew this new logo in 15 seconds using my mouse in Photoshop: 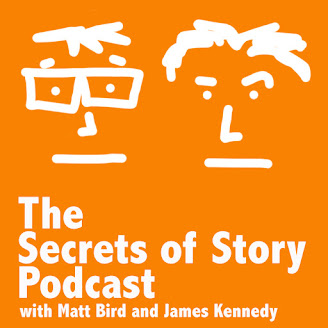 And, wonder of wonders, James and I both kinda like it. It’s pretty ironic that this is the less amateurish version. But that’s its appeal, to a certain extent. So what do you guys think. Dare we go with this ridiculous version? Should we do this version with better art?
But wait!  We have a new contender!  Commenter Friday whipped this one up!  What do you think? 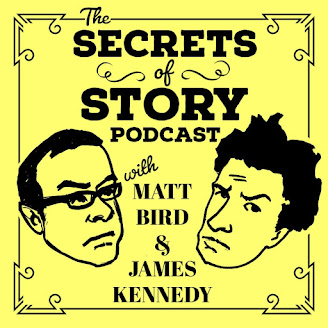 Thanks for all of your input on so many things these past few weeks!
Posted by Matt Bird at 1:27 PM

Let it be known that I still prefer the Mortal Kombat version.

I quite like being able to see your two faces -- the real ones, with Matt's mopey expression and James' raised eyebrow. The boxing is also neat and preps the listener for any passionate discussions. The third image shown doesn't have boxing, but I think it could be improved if you can do something like a line filter or dot matrix filter. Like an orange-and-white version of this: https://www.deke.com/_LEGACY/files/images/figures/line_art/Line-Art-step00A.jpg (image taken from here: https://www.deke.com/content/creating-a-photo-realistic-line-drawing-part-1). Or maybe it would look horrible, not sure.

If you do go the ironic simple MSpaint logo, my two main thoughts are: (1) The circular brush doesn't match the hard edges of the text font too well. Maybe a square brush who do better? And (2) keep the boxing out, as simple faces with boxing stick-figures might come off as too juvenile.

I'm sure other commenters here have worthwhile ideas, they've had really smart suggestions in the past few weeks(!!)

I think the simplified version is totally an aesthetic!

Simplified version is cute. Would it be cuter done with punctuation to match the sharpness of the font?

I know it's been quite the comedy hour lately, but unless you two are planning on talking about video game storytelling (which is quite interesting, but not your jam afaik), I'm not down for the Mortal Kombat fight there personally.

I had a go at a sketch as well. Your faces are so scowly. It's great. (Scrolliness to maintain some consistency with the "brand"/book cover while still shining a spotlight on James' face and presence.)

Ultimately, some mash up of "serious storytelling" plus "sometimes silliness" in image form would work best, imho.

Friday, I love the image you created! It's fantastic, thank you so much!

Awesome that you did that! Could you contact me at MattMBird@yahoo.com? Thanks!

@James: I'm flattered, thanks. If it gets the votes, I would be happy to clean it up and tweak it to your/Matt's liking. That really was a ten minute job.

I would go with either that or the simplified hand-drawn with the edges cleaned up to pair better with the font.

Also, just wondering... is there a reason for the orange that I'm missing?

These are all great but I really love the newly submitted one at the very bottom. Feels like it checks all the boxes!

Friday, if you contacted me, I didn't get it. I'd love to talk to you about using yours, if you could contact me at MattMBird@yahoo.com. Thank you so much!

Matt, I tried sending again. It's coming from jessica@jfriday.com.

I like Friday’s illustration, but the simpler typography of your orange version better.