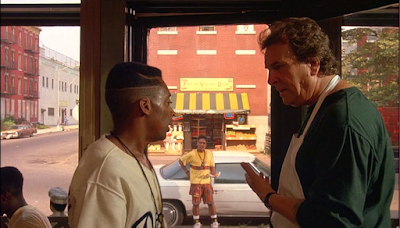 It’s interesting all the ways that Mookie is like Ripley from Alien. They both stick by their company, even at the risk of their friend’s lives, until almost the end of the move, when each one decisively decides to destroy their workplace. Both serve in their story as the only one who bridges upstairs and downstairs (Ripley is the only one who ever goes down into the bowels of the ship to visit Brett and Parker, Mookie is the only one who lives in both the black and white worlds.)

Why it might be hard to identify with Mookie:
Believe
Care
Invest
Five Es
Rise above
High five a black guy