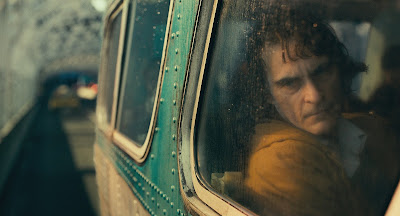 By the time I finally got around to reluctantly watching my screener of this movie, I had been fully conditioned to hate it. Imagine my surprise to find out that it’s actually pretty great.

First, I had been warned by months of media coverage that it was a lazy Scorsese knock-off. It’s not. If you want to see a lazy Scorsese knock-off, go watch The Irishman. I thought this one definitely wanted to be in conversation with Scorsese, but its greatest assets (the cinematography, score, production design, and Phoenix’s performance) were not at all indebted to Scorsese. I thought it was an original vision.

Secondly, I had been warned by the media that this movie was recklessly reactionary. The ghouls at AVClub.com were openly rooting for there to be shootings during the opening weekend showings. They ran article after article about violence that was sure to come. It didn’t. Personally, I always found the two movies this one is most in conversation with, Taxi Driver and The Dark Knight, to be vaguely reactionary, and it’s never surprised me that one inspired a presidential assassination attempt and the other a mass shooting. Of course, it’s not too late for this one to inspire violence (the Hinkley shooting wasn’t until four years after Taxi Driver), but, having seen the movie, I’m not surprised that it hasn’t.

(Just to be clear, Taxi Driver is superior pieces of filmmaking, but I worried more about people taking the wrong message from that one than I do from this one.)

Speak to Real Life National Pain: This is one of the only American movies to take the Trump election seriously. It’s no secret that a lot of people on the left think we shouldn’t do that. “There was no populist element to Trump’s victory. Blame the Russians and move on. Triangulate better next time.” They get pissed whenever a reporter interviews a Trump voter. The problem, they say, is that such voters weren’t silenced effectively enough, and we’ll do better at that next time. This movie actually stares down America’s screaming throat and listens to the madness.

I’m old enough to remember when the left embraced empathy and the right was against it, but that seems like a long time ago now. The belief now, as far as I can tell, is that there’s never been a strong enough wall between empathy and sympathy, so one is always in danger of leading to the other, so we should all just stop feeling each other’s pain and raise the barricades instead.

What I love about this film is that Phoenix demands our empathy without ever once asking for any sympathy. Sorry AVClub, but nobody left the theater wanting to be Arthur Fleck or any of his pitiful followers. You can feel for people and still loathe their actions. We must learn to do that again.
Posted by Matt Bird at 8:00 PM

From a fellow reluctant watcher, well said. Also, it’s like second Christmas with the daily posts here. Many thanks.

This is a movie I cannot watch, because the movie's take on the Joker is so completely wrong-headed I don't know that I could get past it to see the movie in front of my face.

Why yes, I am a comic book nerd of many decades, why do you ask?

The literal essence of the Joker is he doesn't have reasons. He is the embodiment of vicious chaos. He can fool you into thinking he has motives, but in the end, he does what he does because of what he is. Anything more is foolishness. That's what makes him scary, that's what makes him a villain, and that's why he's so effective a foil for Batman, the embodiment of self-control and order.

Todd Phillips even let fly with some nonsense about why the Joker didn't kill his neighbor. In an interview he said: "Most people understood that, even as a villain, he was living by a certain code. Of course he didn’t kill this woman down the hall." Are you serious? The Joker...has a code?

NO! NO HE DOES NOT LIVE "BY A CERTAIN CODE!" THAT'S THE ENTIRE POINT OF THE CHARACTER! AAAAAAGH!!! [shakes fist at Hollywood]

I am not the target audience for this film.

See, that was why I didn't like "Dark Knight". I was shouting, NO YOU PEOPLE DON'T UNDERSTAND JOKER AT ALL! HE DOESN'T MAKE YOU CHOOSE BETWEEN TWO HORRIFIC THINGS! YOU'RE THINKING OF JIGSAW FROM THE "SAW" MOVIES! AAAAGH!

I didn't really like how the movie felt the need to spell out so many details to the audience. ***SPOILERS*** Like his interactions with the woman being a hallucination. It was neat, before they proceeded to spend the next minute showing a highlight reel of everything in case we didn't get it! And the "Mur-Ray" seen at the end, spoon-feeding the message to the audience word for word. And watching Joker write "They expect you to be happy when you're not" in his journal and then ZOOMING IN on that journal page WHILE sad music plays. omg. Phoenix may have not demanded our sympathy but the score certainly did.

It was good otherwise (it wasn't bad!), but the thematic execution was lacking at times. If nothing else I wish the score was more neutral, or at least less sadsad. Feb 8 2020

I agree that the movie was too heavy-handed at times, and those are all good examples. I loved the score though.