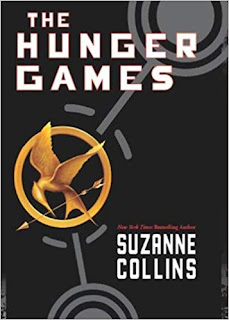 As I point out in my first book, Suzanne Collins doesn’t fit the popular narrative of the overnight success Cinderella story. She started out with a five book series about a kingdom of cockroaches that sold respectably. But then she dug down and hit gold, narratively and financially. She realized that the legend of Theseus (Evil king demands that teens be summoned to take place in deadly games) might resonate with today’s teens, transposed it to a dystopian future, and crafted a powerful new fable.

I think that Collins’ greatest inspiration was that there was a generation that was aging out of the Harry Potter books and was now craving something super-dark, and she was prepared to give it to them. So how does she convince these former-Harry-lovers to embrace a new type of heroine?

The late Blake Snyder wrote three great books of writing advice that are still widely disseminated today, but I have a problem with his central piece of advice, that heroes should be introduced by a selflessly heroic moment in which they “Save the Cat.” “The Hunger Games” takes a different path. Let’s look at the third paragraph:


I guess you could say she saves a cat …from her own murderous impulses. But she still describes her as disgustedly as she possibly can!

So why do we like this cruel heroine? Just from this one paragraph, we already believe, care and invest:

Believe: This one paragraph does a great job showing a consistent worldview. The syntax is consistent terse (“He hates me. Or at least distrusts me.”). Her value judgments show her character (“he’s a born mouser”). Her idea of showing kindness is to share the entrails of her kill. She doesn’t seem like an accumulation of author-imposed traits. She seems like a fully-realized human, albeit an unpleasant one.

Care: She’s clearly suffering and doing what she can to survive (“The last thing I needed was another mouth to feed.”) If she was living a comfortable life in the suburbs, we would hate her for wanting to kill a cat, but seeing her hunger, our heart goes out to her. We wonder what we would do.

Invest: We definitely trust her to solve whatever challenges this book offers. She’s bad-ass, and she’s ready to make hard decisions. Shortly after this, still on page one, she slips though an electrified fence to bow-hunt her own food. We’ve picked the right hero!

Don’t worry, Katniss does get a chance to kill a cat a few pages later:


All of this cat killing ironically sets us up for her one big moment of selflessness later. If Katniss volunteered for the Hunger Games because she was a super-nice person, we wouldn’t buy it. It’s only because she’s so vicious that it’s believable and compelling.
Posted by Matt Bird at 12:00 PM