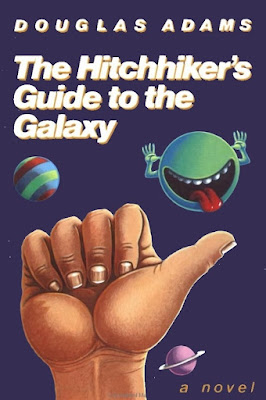 This book actually begins with a few pages about Earth and its unawareness of the existence of the titular ebook. These pages establish that we’ll have an omniscient voice with a wonderfully funny and skewed point of view. We love it, but we still long for a hero we can identify with. We’re not too worried, though, because what we’re reading is in italics, and if we flip ahead a few pages, we’ll note that “Chapter 1” hasn’t begun yet, so we know our real hero is still coming.

Then chapter one begins and we meet Arthur. Continuing with the omniscient voice, we can see what hungover Arthur doesn’t: That his house is surrounded by bulldozers. The fact that the narrative voice is omniscient prepares us for the long sections where we’ll leave Arthur behind to jump across the galaxy, but Adams knows that, in order to get us to commit to the book, we’ll need a hero to believe in, care for, and invest in, and we’re about to meet a wonderful example.

So why do we quickly come to identify with Arthur Dent?

Believe: In the first paragraph of chapter one, we get the following description of Arthur’s house:


By the time the book ends, we’ll learn that the meaning of life is 42, which is to say that this is a book that will derive humor from attempts to quantify the unquantifiable and it’s already doing that here: how can windows exactly fail to please the eye? It’s absurd, but it’s also endearing, because we know what he means. Finding out about the house’s imperfections makes us more concerned that it will be torn down, because now it feels real to us.

We then meet Arthur and find out, “the thing that used to worry him most was the fact that people always used to ask him what he was looking so worried about.” This is a universal emotion we’ve never heard described before in quite that way, which is the always the goal.

Care: It’s pretty easy to care for Arthur. After all, his planet is about to be destroyed to make way for a galactic highway! Of course that’s a little big for Arthur or the reader to conceive of, but it just so happens that Arthur is already dealing with an exactly analogous situation: His Earth house is about to be torn down to build an Earth highway.

In order to bond us with Arthur, Adams must make this as exasperating as possible, and once again, he achieves this through outrageous absurdity. As Arthur lies in the mud, he spars with the foreman in charge of tearing down his house:


It’s too absurd to be remotely realistic, but we still strongly identify with Arthur’s frustration because this feels like the sort of thing we’ve all been through when dealing with bureaucracy.

Invest: Ultimately, Arthur will hardly be a bad-ass in this series, but Adams knows he must get us to invest in his hero right away, so Arthur starts out by doing the bravest thing he’ll do in the whole saga: blocking a bulldozer with his body. This is a hero! If he just stood there stammering while they tore his house down, we wouldn’t bond with him. Of course, in the next chapter, he’ll basically just stammer as another foreman destroys his planet, but we know that, when he could act, he did.
Posted by Matt Bird at 11:18 AM

Amazing online journal! This is valuable site. I am totally fulfilled by your splendid work. Thankful for sharing. I had a great time over read your blog passage. Your blog have not too bad information, I got keen considerations from this staggering web diary. I am persistently glancing through like this sort blog section. I believe I will see again....