Storyteller’s Rulebook: It’s Okay to Put Some Distance Between the Reader and the Character 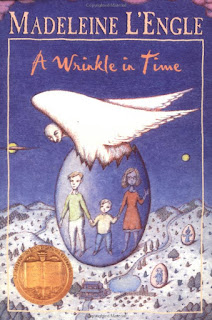 I talk a lot about identification. It’s good to have your audience identify with your hero: experience the world through her five senses, take in all the same information, try to solve the same mysteries at the same time, etc (whether it’s first person or limited-third person.) And in many cases, the author will want the reader to reach the same conclusions, love the same people, hate the same people, share the same fears, etc. But not in all cases.

But even when there’s no one to point out that the hero’s wrong, a prose writer can create distance between us and the hero, even just by telling us her obviously-overblown thoughts. The writer has various ways to let us know or suspect that the hero may have a distorted perception of her own life.

Let’s look at Meg in Madeline L’Engle's “A Wrinkle in Time”:  I do wonder if adult reader and tween readers have different reactions to Meg: As an adult, it’s pretty obvious that she has bad self-esteem distorting her view of her world. We suspect that she’s not as weird looking as she perceives, and we even doubt that she really heard all these insults that she thinks she’s heard.

Certainly, when she soon meets a sports-star who thinks she’s beautiful (without her glasses on, anyway), we don’t think, “That’s odd, why is he attracted to this Quasimodo that everyone else finds repulsive?” Instead, we think “I knew she was wrong about her looks, and she was probably imagining some of the criticism.”*

We can also see that Meg is far too scared of her world. When the story begins, she’s cowering in terror from a storm outside, but we’re not so scared. She then gets very scared about reports of a tramp on the loose, but we guess that her fears are overblown. When it becomes clear that her five year old brother has been walking around in the woods and hanging out with the tramp (Hey, it was the ‘70s), and he says she’s okay, we’ve already figured out to trust his judgment more than Meg’s, though we still identify with Meg as our hero, not him. We believe that she’s real, we care about her, we’re invested in her goals …but we don’t trust her perceptions or judgment. We share her hopes, but not her fears, which is a tricky line for a writer to walk.

How does L’Engle do this? By giving Meg a level of hyperbole we don’t trust, but which we find endearing. When L’Engle writes “—I’ll make myself some cocoa, she decided.—That’ll cheer me up, and if the roof blows off, at least I won’t go off with it”, we look down on Meg a little bit, sure that her fears are overblown, but we’re bonded all the more with her as a result. We’re amused that she’s using her overblown fears as an excuse to have a sugary drink. Both the fears and the desire for cocoa are self-indulgent, and we’re amused by the confluence of them, in a slightly-paternalistic way. This is different from full identification, but not so different.

Next, we’ll talk about how this played out in the recent movie…

*I asked my wife, who loved the book as a tween and just read it to our daughter, if she thinks tween readers doubt Meg’s negative perceptions as much as adult readers do and she thinks tween girls at least totally identify with Meg, far longer than adults will, believing (and identifying with) Meg’s negative self-assessment, only doubting it a little when her mother says otherwise, and only seriously doubting it when Calvin says she’s gorgeous (which of course lets them fantasize that they will soon find out from a boy that they’re secretly gorgeous.)
Posted by Matt Bird at 7:26 PM

I don't know that this puts distance between reader and character; if we see ourselves in a character's misapprehensions, wouldn't that make us feel closer? Meg's not an unreliable narrator, she's a character imposing her point of view on the world, which is necessarily biased and flawed, and the bias in her point of view is common as dirt.

Overblown self-loathing is a universal trait that we seldom talk about, and kids seeing it on a page for the first time will recognize themselves and hugely identify with the character. Then comes Calvin to show that the self-loathing is misplaced, and the kids see that their hopes that they're exaggerating to themselves are justified, and a mad love affair with a character and book is born. Meg's self-loathing and its disproving by Calvin and her family always struck me as the strongest appeal of the book.

I think I'm missing your point. What would the opposite scenario look like? What are books that engender fierce love and don't have this "distance" put into them? Wouldn't they feel hollow or cold, since we wouldn't be seeing the world through human (i.e., flawed and biased) eyes? How does this differ from a character having flaws in the more usual sense?

A parallel from adventure fiction is Horatio Hornblower. Hornblower is a hugely skilled sailor and a man of great bravery, but inside his head he's a borderline incompetent and coward who does what he does only because he feels he absolutely has to. His self-loathing and poor self-image ("what kind of naval officer gets seasick?") set against his actions show that he's fooling himself. And perhaps some readers derive comfort from the suspicion that they too are too hard on themselves and much better than they think themselves to be.

I feel we don't initially have this distance with any of our other kid-story heroes: With Harry Potter, Katniss Everdeen and Stanley Yelnats, we trust their opinions on their world and we share their hopes AND fears. There's nothing in their world that scares them that doesn't scare us. They like themselves just as much as they ought to. (Distance between us and Harry only opens up a little in the second half, when we sense he's wrong to distrust Snape, or at least adult readers do. Distance with us and Stanley later opens up just a tad when he lets Zero work without him) The only kid hero who we've doubted the perceptions of in his first chapter is the one in an adult book: Brandon Stark. Two of our adult heroes, Arthur Dent and Jack Reacher, don't and shouldn't doubt themselves. Sethe and Rahel Ipa should maybe think better of themselves. Nick Dunne has low self-esteem, but we sense that he's probably right to look down on himself.

Meg is more like an adult hero, not an unreliable hero in terms of lying to us, but in terms of giving us a false perception of her world that the author allows us to doubt. We have a bit of distance from her, but that paradoxically binds us closer to her, because of L'Engle's skill.

Identifying with characters is extremely subjective and never actually universal. There's always someone complaining about how unrelatable/unlikable any main character is, and there's a lot of people - including myself and a lot of my immediate circle of friends, which includes people who work with fiction professionally - who have found so few characters, let alone protagonists, to be people that they can identify with that they've long since stopped complaining and just accepted that that's how things are.

I think that the audience identifying with the main character in a story isn't a primary element, rather, it is a relatively straightforward and easy way to achieve several things that are more fundamental, those being that the character is understandable, likable, and interesting.

Very few people, I think, really identify with Jack Reacher, rather, he checks all of those boxes, making up for the differences by having most of them make him more "idealized" and better suited for escapism.

Similarly, the inner conviction that Meg is wrong about so much, i.e. that the reader disagrees with her about so much, is a wall against identification - but since we're familiar with and generally sympathetic to the perspective of an insecure child, we don't find it to be a wall against understanding and liking Meg, nor finding her interesting.