Storyteller's Rulebook #170: Every Scene Needs Its Own Hero 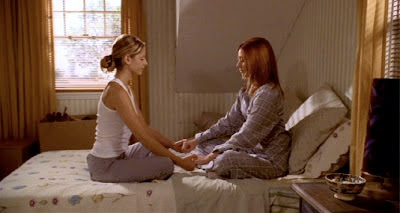 Obviously, in most scenes you write, your hero will be in the scene, and will also be the hero of the scene, aka: the person we admire and want to see triumph in this interaction.  But that’s not always the case.

In some scenes, even if the overall hero of the story is present, the audience is actually rooting for someone else.  Sometimes we’re rooting for someone else to set the hero straight.  Frequently, for instance, when Buffy and Willow disagreed, the audience sided with Willow.  Buffy was better in a fight, which made her the capital-H “Hero” of the show, but Willow was wiser, which made her the “hero-of-the-scene” for most of her scenes with Buffy.

And what about scenes that don’t have any of our “heroes”?  There still needs to be conflict within that scene, and the audience should be able to pick a favorite to root for in that conflict.  Think of the scene in Die Hard where we cut away to the local news coverage: the anchorman mistakenly refers to Stockholm Syndrome as “Helsinki Syndrome” and his co-anchor rolls her eyes.  Even this small scene has its own hero and villain.

Even if the scene merely consists of two villains, then that scene also needs its own “hero” that we want to see “triumph” in this interaction.  We should admire one villain’s reaction to this situation (even it’s only to admire the competence of his or her villainy) and we should disdain the other.

If your hero and villain keep running circles around inferior scene partners in separate scenes, then the audience will get more and more excited about their eventual confrontation. The audience will start saying, “Wow, these two both dominate every scene they’re in!  What happens when they’re finally in a scene together?”  Which one will continue to dominate, and which will be humbled for the first time?

This rule is something you need to keep in mind when you’re building your ensemble: You have to multiply everything by two.  It’s tempting to say, “Okay, the aliens invade and we show how the whole town reacts, so we cut back and forth between the sheriff and the priest, and the school teacher, and the general at the army base, and...”  Wait, stop!  In order to write actual scenes, you’re actually going to need two cops, two priests, two school teachers, two army commanders, etc, at each location.  And each of those pairs need contrasting personalities because you’ll need to have conflict between the scene partners.  Doesn’t that make you re-think you inclination to have so many settings?
Posted by Matt Bird at 1:00 PM

This rule is something you need to keep in mind when you’re building your ensemble: You have to multiply everything by two.

By this, do you mean that you need someone for the rancher or the cop to talk to, and that's why you need 2 of them?

If so, okay, I get it. If not, please explain further?

Yes, sorry if that was unclear. You not only need at least two characters in each location, but they need to have contrasting personalities.

I would team the schoolteacher up with the cop, and have the homeless guy team up with the priest!

I think you can extrapolate this rule one more level too, depending on the sort of film or TV show you are writing. Which is where a book like "The Sequence Approach" can help, especially in its analysis of LAWRENCE OF ARABIA which, if I remember correctly, has at least one sequence without Lawrence in it (or where he's very much in the background).

Your advice may explain why there are so many more parts for actors than for actresses.