Storyteller's Rulebook #171: It’s Impossible To Learn If You Feel You Shouldn’t Have To 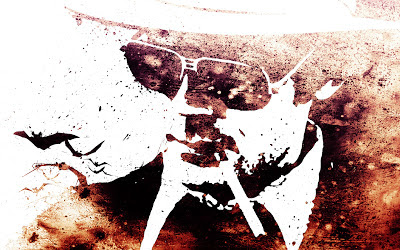 Sadly, we now have seven active remotes in our living room (TV, DVR, Blu-Ray, DVD, Wii, Speakers, and AC, I think).  I consider this to be an annoyance, but my wife (usually a sweet-tempered soul) considers this to be an affront.  It offends her sense of how the world should work.  Whenever I fumble with the pile of remotes, she indignantly laments aloud that she would have no idea how to turn on her own TV if her life depended on it.

We’re talking about a massive amount of time and resources she’s already invested here:  over a thousand of dollars worth of equipment we have acquired over ten years of marriage, hundreds of DVDs she has purchased or received, an infinite cornucopia of cable and Netflix programming now available instantly. All denied to her.

Now you have to understand, my wife is very technically proficient.  Over at her own much-more-successful-than-mine blog, she codes her own html and creates and embeds sophisticated videos and podcasts.  Tech does not intimidate her.

So why does she declare that all is lost when the remotes come out?  I mean yeah, it’s annoying, but there’s basically a five-step protocol to determine which remotes to use in which order.  It would take her maybe ten minutes to learn it and then she’d know it forever (or until we get our eighth remote.)  Considering that she’s about a dozen times smarter than me, this wouldn’t be a big strain for her.

But I totally believe her when she says she can’t learn it.  Of course she can’t.  And here’s why: she feels that she shouldn’t have to. And as long as anyone feels that way, learning is impossible.


I’m the last person to cast aspersions here.  I have wasted years of my life refusing to learn things that would have taken me an hour or two to master, simply because I thought that I shouldn’t have to. That’s mostly what this blog is all about.  Every time I figure out something new, like with the last two rules, it seems so obvious as soon as I say it, so why did it take me so long to figure out?

As writers, we’re constantly being fed poisonous messages by crappy writing teachers and flattering books: “Listen to your muse.”  “Be intuitive”  “Be innovative.” “Don’t force it.”  “Don’t overthink it.”  True geniuses, we’re told, don’t put rules on their storytelling.  Great writers follow their heart or their gut, never their head.

But eventually you figure out that the people telling you this have had no success of their own.  You realize that even a brilliantly original iconoclast like Hunter S. Thompson taught himself to write by re-typing “The Great Gatsby” word for word.  You realize, in other words, that writers, like everybody else, have to learn to do what they do by analyzing what came before.  In the end, you have to learn all those rules that everybody says you shouldn’t have to learn.

That’s the real hard work of learning to write: learning to accept that you need to learn it.  If you can do that, you’re 90% of the way there.
Posted by Matt Bird at 4:00 PM

I don't think I've ever read a book on writing that said you didn't have to know the rules because, even if the rules they were espousing were rubbish they need them otherwise there'd be nothing for them to write about.

Not that I can name one off-hand.

Regardless of the actual point of your post, get yourself a Harmony remote. 1-button access to most-frequently used combinations. It's not perfect, but it beats 7 remotes :)

Labels with brief pointers to on-device buttons etc that need to be pushed can help.

On her blog, she is responsible.
However at home, you da man.

It also probably has something to do with women who leave words out like, "I have nothing to wear" when a closet full of clean clothes is readily available. What women who say this mean of course is that they have nothing "new" to wear.

So following this line of unequivocal and perfect logic ... you should buy your wife a "new" remote.

(At our house, we keep the remotes in a tin bucket beside the couch. We have 5.)

Interweb telling me that factoid at the end is Hunter S. Thompson, but I didn't sleuth out a source.

Thanks Ithadeo. My bad. Changed now. (To future generations: I originally mis-remembered it as Henry Miller)