Storyteller’s Rulebook: Help Us Get Our Feet on the Ground (Or Don’t, If That’s What You’d Prefer) 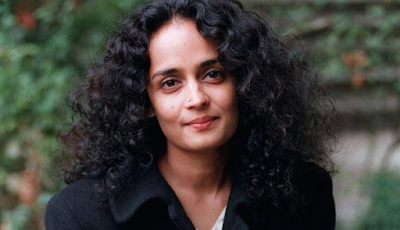 Last time we looked at the way Arundhati Roy accumulates reality from small, odd, vivid details, but once we piece it together “The God of Small Things” is actually a fairly plot-packed story: We get a riot, a molestation, an accidental drowning, and a police murder all happening in a weeklong-period.

So let’s talk about how authors get us to commit to a book in the first chapter, especially one where the narrator (1st or 3rd person) has some perspective on events. The traditional way to is to promise that a lot of juicy stuff is going to happen later on if you keep reading. And indeed, this book is well set-up to do that. We begin with an adult Rahel coming back to town in modern-day to reunite with her long-lost brother and deal with how the event that separated them and traumatized their lives. We will then spend most of the book reliving that eventful week.

I know how I would have written that first chapter: We meet our mysterious heroine as she gets off the train, we find out just a little bit about her, we see that she’s on a mission. She meets with someone from her past while looking for her silent brother, and obliquely references the riot, the molestation, the drowning, and the murder (Now our appetite is whetted for the shocking events to come). Then she finds her brother and tries to speak but the memories flood over her. Then we cut back to the day of the riot and we quickly get dialogue of 7-year-old Rahel in that time period. Now our two heroines (adult Rahel in 1993 and young Rahel in 1969) are established. From that point, Roy would be free to jump around to other points in time, such as the birth of the twins, the mother’s later death, Rahel’s own failed marriage, etc.

But Roy doesn’t do that. She’s all over the place and it’s hard to put your feet down anywhere for the first thirty pages or so. When I read the book, I read those thirty pages, realized I was totally lost, and decided I’d better go back and read them over again if I was going to continue. I did so, was glad I did, and then kept going until I was able to put my feet down around page 40 or so.  While this whole process was going on, I was loving the book, because of the sentences, but I was struggling with committing to the plot.

Roy does foreshadow the book’s momentous events in these opening chapters, but because I didn’t have a sense of whether they were going to happen in a timeline I was going to stick to, they didn’t whet my appetite very much. What I really wanted was dialogue. Dialogue tells me to put my feet down, but the first dialogue we get is at Sophie’s funeral, which actually comes at the end of the 1969 timeline, not the beginning, so that just discombobulated me further.


Now, obviously, this book was a huge award-winner and best seller, and Roy knows exactly what she’s doing.  She isn’t trying to do what I want her to do and failing, she’s doing what she intends to do and succeeding. To a certain degree, her style is emblematic of what is referred to (somewhat problematically) as post-colonial literature (Roy would probably dispute the “post” part). One of the most famous first sentences in literature is from what is perhaps the ultimate post-colonial book, Gabriel Garcia-Marquez’s “One Hundred Years of Solitude”:


Right there in the opening sentence, we have three time periods mixed up, and the reader will have a hard time getting his or her feet on the ground after that …and yet it’s very easy to fall in love with the book.

Such writing has its pleasures. Readers do enjoy being challenged. We can admire how such writing captures the feeling of being lost and overwhelmed by the modern world, and, as we make sense of it, we can gain tools to sift through and make sense of our own jumbled lives.

Post-colonial writers have literally had the ground yanked out from underneath their feet by invaders, and now that they have reclaimed their countries, they’re trying to find their footing again. But the ground isn’t letting them. It keeps shifting. When they describe their work in interviews, many of them say that their sense of identity, both personal and national, remains fractured. The style of post-colonial literature captures and grapples with that problem.

So the question is, should non-post-colonial writers emulate this style? These are, after all, best-selling and beloved books. But it’s a lot to ask of your reader, especially if it’s not a style that you are personally deeply committed to. Unless you feel that such a style is an essential expression of your theme, you might want to put the reader’s feet on the ground a little more firmly than Roy does, just with a few uses of grounding dialogue.
Posted by Matt Bird at 12:00 PM

Wow, marvelous post layout! How long have you been running a post for? you make running a post glance easy. The full glance of your website is excellent, as well as the content material! I’m not positive the place you are getting your information, however great topic. I must spend some time studying much more or understanding more. Thanks for great information I was looking for this information for my mission. content marketing singapore

excellent points altogether, you simply won a new reader. What could you suggest about your post that you simply made a few days ago? Any positive?googlesingapore

F*ckin’ amazing things here. I am very happy to peer your post. Thank you a lot and i am having a look ahead to touch you. Will you kindly drop me a e-mail? web developer singapore

Thanks on your marvelous posting! I seriously enjoyed reading it, you happen to be a great author.I will be sure to bookmark your post and definitely will come back someday. I want to encourage you to ultimately continue your great work, have a nice weekend! taxi service in wayanad

My brother suggested I might like this blog. He was totally right. This post truly made my day. You can not imagine simply how much time I had spent for this information! Thanks!
seo consultant

Hi! I've been reading your website for a long time now and finally got the courage to go ahead and give you a shout out from Lubbock Tx! Just wanted to tell you keep up the fantastic job!
web designer singapore

check tough the LCD TV models, mose of the models are mainly for use in USA , only support NTSC system and ACST tuner. is unable to use it in other countries.

"The clearest way that the digital age has effected marketing is by the popularity and reach of social media and the need to have a strong online presence for companies.

Hello There. I discovered your weblog using msn. This is a very smartly written article. I will be sure to bookmark it and return to read extra of your useful information. Thanks for the post. I’ll certainly comeback.search engine ads for restaurant

Civil involves much more structures such as roads, bridges, canals, dams, and larger buildings such as skyscrapers and office buildings.

I wanted to type a note to be able to appreciate you for all of the superb tips and hints you are giving on this website. My time intensive internet search has finally been compensated with excellent facts and techniques to talk about with my classmates and friends. I 'd mention that many of us visitors are undeniably blessed to be in a wonderful site with so many wonderful professionals with very beneficial methods. I feel somewhat grateful to have encountered your webpages and look forward to some more awesome times reading here. Thanks once more for all the details. seo marketing singapore

I’d need to verify with you here. Which is not something I normally do! I enjoy studying a submit that may make people think. Also, thanks for permitting me to remark! ecommerce website design singapore