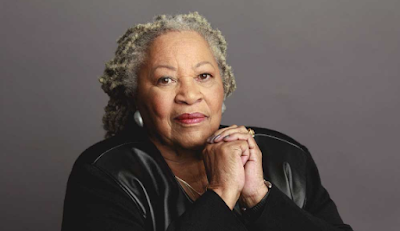 “Beloved” is a great ghost story, a great family story, and, just as important, a vital story about the legacy of slavery. Crucially, Morrison could not have more authority to tell this story. When she dedicates her book to the 60 million who are estimated to have been killed in the middle passage, she’s not only tapping into her blackness, but the power of her depictions of racial injustice in her three previous novels, which established her as the ideal writer for this topic. When Morrison turned her attention to the 19th century, everyone was eager to hear what she would have to say.  The result was a Great American Novel.

But what if you lack that sort of authority?

I’ve been asked to read two books by white people about slavery. The first was a real heartbreaker. When “We Need Diverse Books” was rising, a published author, who was a white southern man, was asked by his publisher to write something to something set in the Civil War about race. They knew he was a great writer who could handle it.

But while he was writing it, the tide of public opinion shifted to “Own Voices”, with extreme scrutiny on white writers writing about race (which isn’t necessarily a bad thing.) The publisher was in a bad position: They had requested this book, and the writer had really knocked it out of the park with a beautifully written book, but now they were worried about publishing it.

So they sent it out to sensitivity readers, but they also sent it out to me to see if I could help make sure all of the characters, black and white, were fully humanized. The writer liked my notes, so he paid me for a second round after revisions, and I was really impressed by his dedication to making his novel better and more sensitive.

But he was never able to convince the publisher to publish it. They thought it was great, but they were afraid of Twitter. They shelved it.

I inevitably kept this experience in mind when I got a later manuscript about slavery, this one from an unpublished author. I couldn’t guess from her name, so I felt compelled to ask up front if she was white or black. She responded with the worst possible answer: She was white, but she too had experienced oppression. I told her flat out to never say that to anybody else! Nevertheless, I could tell that she was genuine and I was eager to give her novel an unbiased reading.

Her novel was also very good but I worried about several aspects. To pick one example, the family had an exceptionally kind master who liberated them. This wasn’t typical of the era by any means, and a white writer could be accused of choosing this story out of an urge to show that slavery wasn’t so bad (though that wasn’t at all her intent). Ultimately, I gave her a lot of notes to help revise the (already very good) text, as I do with everyone, but I felt I had to warn the writer that she was very unlikely to find a publisher.

In any type of writing, authority goes a long way. This is one reason to “write what your know”: nobody can question your right to write it. Morrison writes with devastating authority. Of course, in theory, anybody can write about anything if they do enough research and write it well enough. But that theory is being tested.
Posted by Matt Bird at 8:00 PM

A white person can experience oppression. It could be from being LGBT, etc.