Didn’t Make the Best of 2017 List: The Phantom Thread 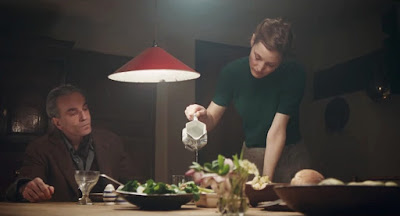 Now that we’ve finished our list, it occurred to me that I should go back and talk about one last movie, and why it didn’t make the list.

I occasionally get emails from readers of my book asking for a waiver that will allow them to break one of my rules. I always grant them, of course. I did insist in the book, after all, that no story could or should follow every rule, but you just need to be aware that each speaks to a narrative expectation your audience will (consciously or unconsciously) have, and if you’re going to defy some expectations (as we all should) then you need to be aware that will create some friction. There will be a little risk of straining the connection to the audience, so you might have to do it carefully and maybe compensate for the risk.

Specifically, the reader was saying that his character would be greedy for greed’s sake, which was both his motivation and his flaw, whereas I recommended in the book that money wasn’t a strong enough motivation on its own, and the hero (or antihero, or villain) should want to buy something specific (such as Walter White’s medical bills) or impress someone specific (such as Daisy Buchanan).

But the reader brought up the character of Daniel Plainview in There Will Be Blood, who is just a psychopathic greed machine, to no larger purpose, and that’s a good counterexample. Daniel Plainview, like a lot of Paul Thomas Anderson’s heroes, is not easy to understand or identify with, but he’s fascinating and compelling. Anderson has accepted the risk: he knows that he’s creating an uncommonly opaque character, but he’s compensated for it with sheer power. We love Plainview’s forcefulness and intensity. He’s a mystery we want to solve. I would say that the same is true for both men in The Master, a movie that I ranked as the best of its year, but one that even many PTA fans didn’t like.

But that brings us to PTA’s two most recent films, neither of which made my lists. I tried to watch Inherent Vice twice, but gave up on it both times, too confused by the plot and too alienated from the blank hero. Each time I thought, “I really want to stop watching this,” and so I did.

I liked The Phantom Thread a lot more, but not enough. As with There Will Be Blood, Daniel Day-Lewis again plays an opaque and megalomaniacal character, and, as always, he gives a fully humanized performance, but this time I didn’t find his character as compelling. I was just put off by this jerk, not intrigued by him.

Then we get to the ending: His wife poisons him for a second time, and he reveals that he knows what she’s done (and possibly knew about it the first time?) and doesn’t mind at all. Huh? I was utterly baffled, and not in a compelling way. I realized I didn’t know this character at all, because nothing he had done up until that point prepared me for this bizarre reaction, but, instead of wanting to solve the mystery, I just didn’t buy it.

If you want your audience to “buy” each plot turn (and you do), then you can either “sell it”, or you can play it cool and intrigue your audience into coming to you. This is a tricky proposition. In most of PTA’s movies, I’ve happily met him more than halfway, but when he loses me, he loses me, and that’s a risk he chooses to take.
Posted by Matt Bird at 8:00 PM

It took me two painful attempts to watch Inherent Vice, so I'm relieved to read that I'm not alone here. For me, PTA is only second to Kubrick, so I really wanted to like and enjoy this movie, but ultimately couldn't. The screenplay is definitely worth a deeper analysis. I want and expect PTA to break the storytelling rules, but this will always increase the risk of something not working. Maybe Day-Lewis is better at compensating for these risks than Phoenix?

I definitely think so, though I did love The Master.