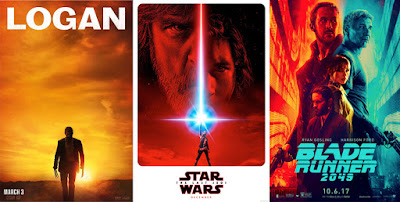 Time for a confession: James and I actually recorded a podcast episode where we debated the merits of The Last Jedi, but I sounded way too sour and inarticulate so I shelved it. I feel bad about that, because James was very passionate and well-spoken in his praise for the movie, but the episode was ultimately off-brand: Just 90 minutes of me saying “shitty” over and over, without any discussion of writing advice. But let me admit now that I was really bowled over by his enthusiasm. I just kept saying “I wish I’d seen the movie you saw.”

As for the movie I saw, it seemed to fit in with two other acclaimed sci-fi sequels this year, and I pretty much loathed all three. The three movies shared three unforgivable sins:

Too damn long: Logan was 137 minutes, Blade Runner 2049 was 164, The Last Jedi was 152. There was no reason for any of these movies to be longer than two hours. Both Logan and The Last Jedi came to a logical end around the 100 minute mark and then just kept going and going. The Last Jedi had two massive subplots (the casino planet and the mutiny) that just fizzled out and had no effect on the story.

Too disrespectful of the original: It was bizarre how similar Logan and The Last Jedi were:


Ultimately, this is what all discussions of The Last Jedi come down to. Does a new writer/director have the right to come in for movie #9 and ruin all the happiness of the previous 8 movies? There were a lot of reasons to dislike this movie, but I think this was the biggest reason for the backlash. For a lot of viewers, including me, the answer is simply no. The easiest thing to do is take something that someone else has built up and tear it down. If you want to destroy value, destroy your own value, not someone else’s.

(These three movies made me appreciate Gene Luen Yang’s brilliant “Avatar: The Last Airbender” sequel graphic novels even more. He seems to have set himself the rule that he couldn’t in any way undo the happy ending of the series: The couples can’t break up, the villains can’t escape, evil can’t rise again, etc. So how do you tell good stories with those constraints? Well, it’s hard, but Yang is a great writer, so he pulls it off beautifully.)

No fun: Reading the glowing reviews of these movies was a pretty baffling experience for me. Doesn’t anybody want to have any fun anymore? The previous movies in these series were enjoyable. (Okay, not the previous two Wolverine movies, but this was more of a sequel to X2 or Days of Future Past, both of which were fun). These three movies were grim, airless slogs, especially Blade Runner 2049. I wasn’t just checking my watch because they were too long, but because all three bored me out of my mind. Even The Force Awakens, which I had a lot of problems with, was at least lively and buoyant. Empire Strikes Back was dark, but Yoda was delightful. There was nothing to love about these three movies, which is a problem, because there was a lot to dislike.

So just as I was loath to post the podcast, I’m loath to post this post, because my goal is never to just be sour and complain-y, especially about things that other people loved, but boy oh boy I disliked these movies. Feel free to tell me I’m wrong in the comments.
Posted by Matt Bird at 8:00 PM

What did you think about the Canto Bight sequence and Snoke's death in TLJ? I'm not a Star Wars fan at all, so I thought those moments were alright, but I know many fans were angered, disappointed, and/or confused by the choices made. Do you think any of those moments stray from the party line?*

*Never noticed this, but there's no "Straying from the Party Line" label on posts.

I thought the Canto Bight sequence was endless and pointless. (James pointed out that the wanderings of Han and Leia in Empire also went nowhere and ended in failure, but here's the big difference: Han and Leia didn't seem incompetent in the way that Finn and Rose do. It's impossible for me to care about incompetent heroes.)

I liked the surprise of Snoke's death --I generally liked the fraught power dynamic between Rey, Ren, Snoke and Luke-- but the problem was that once he was dead, it felt like the movie should be over, and it just kept going and going.

There is a "Straying from the Party Line" tag, but I usually only use it for checklists: http://www.secretsofstory.com/search/label/Straying%20From%20the%20Party%20Line

I think your point about these stories being unfun acts of creative vandalism are pretty accurate. I've been saying for awhile now that it seems like modern filmmakers are embarrassed of the genre stories they grew up with (or never liked them at all), so they have to make them "serious" and get rid of anything that provides enjoyment or catharsis. I think this misses the point that there's nothing wrong with a story being fun. Some stories try too hard in this vein for the "f yeah!" moments, but when those moments aren't earned, they too tend to fall flat. When a story earns its high points and its thrills, it should absolutely be enjoyable. I get tired of being told my tastes are somehow immature for not wanting a Star Wars movie to be the equivalent of Dostoevsky, only written much worse.

Of the three points in your post, I only agree with the first one. It is pretty long, and I felt like it should have ended multiple times before it did.

The canto bright sequence was pointless for the plot, but not for characters or theme.

"It's impossible for me to care about incompetent heroes."
I don't see how that is a problem of the film.

"No fun": I think there is a place for "serious" genre movies alongside "fun" genre movies (if one wants to use that dichotomy). I did not find this movie boring/dull.

"Too disrespectful of the original". I don't know how this one ruined any more happiness than force awakens. In TFA Evil rises again (Empire & Skywalker), (Leia and Han are separated), Han dies, the Jedi are pretty much gone... the only thing TLJ added was Luke's death, (and details on how the Jedi were destroyed).

These movies takes place more than thirty years after rotj, changes are going to happen, including negative ones. I honestly would have preferred if none of the old characters were in the new trilogy, it's not their story, and they distract from it more than they add.

When they first announced sequels, I thought "Well, that could maybe work", but then they announced that the original cast was coming back, and that they were going to make a new sequel ever other year for the next twenty years, and I quickly realized, "Oh no, that means that they're going to kill the original cast off to make the villains look more evil, so the original trilogy is going to have an unhappy ending now." And indeed that was the case. I don't think the original trilogy needed any sequels, but if you're going to do them, set them 80 years in the future like Star Trek: TNG did. My kids (6 and 3) love the "Star Wars" movies, but they have no idea these movies exist, because I want Star Wars to have a happy ending for them just as long as it had a happy ending for me. Eventually, they will see these movies, but not on my watch.

I really enjoyed the new Blade Runner. I think the studio really took a risk in what was essentially a multi-million dollar art house film, and although it looks like that failed commercially, I liked being able to see the story continue in the route of the Director's Cut rather than the original. I don't think if it went the blockbuster route, it wouldn't have had much mainstream attention anyway, since the original doesn't have anywhere near the same fanbase as Star Wars or X-Men. I agree that it was slow, but I think that's part of the appeal, a change from dizzying pace and spectacle.
I'm looking forward to the rest of your list, I don't know if you'd count the new series of Twin Peaks as Sight and Sound magazine have, if not I'd still be interested in what you have to say about it.