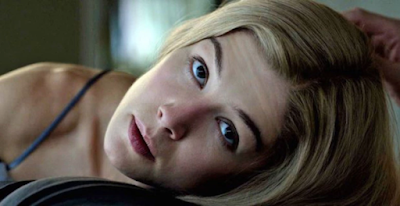 People read “Gone Girl” for the crackerjack thriller plot, but there are dozens of clever thrillers published every year. Why did this become such a phenomenon? Because the actual writing is also pretty great. The book makes great use of language.

It’s hard to write unique similes. In our actual lives we fall back on familiar similes as much as possible, so it’s believable enough when your characters do that, but your readers don’t want to read that. Familiar similes are stultifying to readers. They’re a waste of space. Readers crave unique similes, even if it’s not entirely realistic that your narrator would be coining them.


Is it entirely believable that Nick would come up with such unique similes? He is, after all, a writer. Granted, he’s a retired “Entertainment Weekly” writer, but so is Flynn. If she can come up with these, so could he.

Last time, I praised how different their voices are, well here’s another example: Her similes aren’t as good. She was, after all, a personality quiz author, not a reviewer. She says things like “Like some sort of feral love jackal”. One of her better attempts is “adopted orphan smile”, but then she brags about how good it is, ruining the goodwill that she built up.

(The book also does a great job with unique adjectives, like “thick afternoon naps” and “fish-white feet”)
Posted by Matt Bird at 8:00 PM

Went here for a great all-you-can-eat buffet and they held nothing back. The food, service and mostly the staff at Chicago event venues were truly amazing. I was starving and am one of those voracious "sampling" type eaters who has to try everything in a buffet, and I couldn't make it!