Storyteller’s Rulebook: Give Most Women and Girls a Sense of Humor 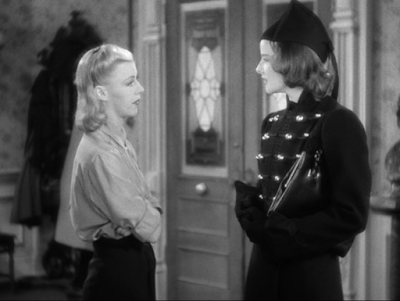 Here’s a rule hiding in a movie write-up from the opening days of the blog. My wife Betsy can always tell when a movie was written or co-written by a woman, because male writers almost never let women or girls have senses of humor. This came up in my write-up of Stage Door, based on a play co-written by Edna Ferber, where the women are wonderfully funny.

(Betsy later went on to edit a book of funny writing by women, Funny Girl. Check it out!)

Even in comedies, when written by men, the women are often the butt of jokes, or impassively reacting to the humor, or sticks in the mud trying to shut down the comedy. If they’re allowed to joke, some male writers seem to fear they’ll take some of the agency away from the hero.

Yes, people have issues, and those issues can sometimes be serious, but don’t think that you have to be humorless to be serious. First and foremost, you have to convince us of the reality of the situation, and in real life, people have senses of humor about their problems, even if it turns out to be a grave situation.  Stage Door has a lot of seriousness to it but the female characters are believable, which means that they have senses of humor. along with their more serious reactions.
Posted by Matt Bird at 8:00 PM

That's interesting. The lack of humour in female characters is sadly true in a lot of works, not only written by men.

Considering guys try to be funny to impress women, or that they think they are having some success if a woman laughs, could it be that sense of humour has been unconsciously associated with masculinity? Cause being funny, or at least trying to, is part of the whole male peacocking in our sort of civilized mating ritual.

Also, I love your blog, and you're a hero to keep writing when there are such few comments. You might think you're writing for crickets, but it's not true. We're here.

Great to hear it. I used to get more comments when I posted more often. Now that I'm down to three days a week (with occasional weeks off) I think I just don't have enough of a head of steam to get a good comment community going.

I agree. Girls are funny too as they are humans as well. Showing them humorless just for the cause of showing them serious is senseless.