Straying from the Party Line: Moral Hypocrisy in Stranger Things 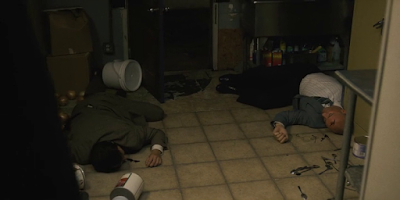 You guys know I hate moral hypocrisy in stories. You should not, for instance, hold your heroes to a different standard than your villains. The one aspect of “Stranger Things” that I really didn’t like was the fact that Eleven kept casually killing people throughout the series. I didn’t like it for several reasons:
This is a series that’s all about the pain caused by the disappearance of a 12 year-old boy, but isn’t the death of each of these random government employees (who may not completely realize they’re working for a bad guy) just as sad? These guys aren’t exactly wearing Nazi armbands.

Such killings also constitute a big plot hole. As we see, family members tend to demand the truth when people disappear, and presumably Dr. Brenner would have his hands full at this point dealing with aggrieved relatives. (And that’s not even counting all the people killed by the monster or disappeared into the Upside-Down!)

Like a lot of stories that were actually made in the 80s, this series tries to walk a tricky line: a horror story about kids that will hopefully be equally appealing to teens and grown-ups: A celebration of innocence and experience at the same time, juxtaposing and combining the sensibilities of Mike and Hopper. For the most part, the series succeeds wonderfully, but I think it would have been even better if she was just knocking all those people out (in a horrific and badass way, if you prefer).
Posted by Matt Bird at 12:00 PM

The show is also bad about people caring about victims who aren't Will. The diner chef, who was a really nice guy, dies under mysterious circumstances, which are ruled a suicide and no one cares afterwards. Of course, the biggest offender of this is what happens with Barb. While it's true that Nancy only cares about the mystery because Barb vanishes, the rest of the world, including apparently her parents, seem to accept that this shy, responsible girl just "ran away" and that's fine, while the town moves heaven and Earth for Will. She also dies offscreen and the revelation of her death is essentially an afterthought, which suggests the narrative itself doesn't even care. It's all kind of a mess.

Along those lines, Matt, have you ever talked about the problem stories have where primary characters are exalted above supporting or minor characters? I mean, obviously our sympathies are likely to lie with main characters, but in a grand sense, they are not more important human beings whose lives matter more and are allowed to do things that would be immoral if minor characters did them. This might fall under the umbrella of moral hypocrisy, but it seems a very particular type that turns up in a lot of fiction.

Yes, I, too, felt that Barb was ill-served as a character. The big question for me was, why did it kill Barb and leave Will alive? If there was some reason to leave Will alive, then why couldn't it have left Barb alive too? The happy ending would have been far more justified if they simply saved Barb too.

The ultimate example of exalting some characters over others was "Lost" where all of the unnamed plane survivors were killed off off-screen sometimes between seasons four and six without our stars caring!

I didn't have the same reaction you did. One, I put those deaths on Dr. Brenner, whose horrendous treatment of Eleven hasn't prepared her to understand what she's doing in the way that another child might, and the lack of concern for the dead guards in the narrative is because of Brenner's lack of concern (and they occur in "his world" or his watch). And two, I knew that she was never going to "live happily ever after" in the Wheeler's basement specifically because she wasn't going to be allowed, narratively, to step back from the consequences of these killings. So when she tells Mike goodbye, that's her accepting the gulf of separation that exists between who/what she is and the life Mike leads and would like to bring her into.

If you are a man suffering from PE, ED, Low-T, Excess Weight, Fatigue or other common men’s health issues, contact the men's health clinic, Prime Men’s Medical Center in Jacksonville, Florida.medical clinic in Jacksonville for ED


If you or your partner suffers from ED, low testosterone or premature ejaculation and are looking for a doctor who understands how important sexual function is to both of y'all then come see Drs. At Men’s Clinic orlando we can help!