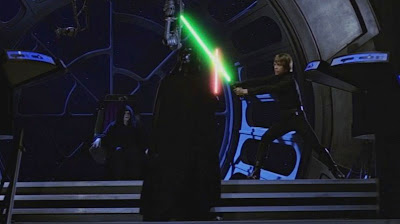 Almost all heroic fiction is founded on the same Great Hypocrisy: “See that guy over there? He thinks that the best way to solve his problems is by killing people! That’s makes him a problem, so let’s kill him!” Explain to me again who the bad guy is here? In the real world, thankfully, meeting violence with violence is most often seen as a tragic last resort, but onscreen we aren’t satisfied until the villain has been turned into chopped liver. Watching people solve their problems through democratic action is boooring.

When we watch movies about would-be peacemakers, like Destry Rides Again, we root for them, but we don’t really want them to see them succeed, because watching everybody put down their guns and go home would just be... you know… lame.

So how can you avoid the Great Hypocrisy and yet still have a satisfying ending? Simple: you cheat. You can allow your heroes to make peace with the enemy army if you give that army a really evil, heretofore unrevealed, boss. The most famous example of this was Star Wars. In order to redeem Vader, Lucas cleverly brought in the Emperor late in the game. Otherwise, the trilogy would have had to end on a hug and no fight.

I grew up on the Star Wars trilogy and that pretty much ruined me for other sagas. That became my standard for greatness: morally serious heroes should seek to redeem the villain, not kill him. Thus, I was inevitably disappointed by the endings of “Lord of the Rings”, “Harry Potter”, “Lost”… any saga that tossed around heady issues but, in the end, came down to “happy ending = kill the villain”

So you can imagine how happy I was about (you guessed it) How to Train Your Dragon. As I watched it, I was thinking, “Gee they’ve been training all this time for a big dragon battle, but now they’ve got us rooting for our hero to make peace with the dragons instead. If that happens, it’ll be admirable, sure, but won’t that feel kinda unsatisfying?” But then, halfway through, we find out that the dragons have a big nasty boss, and I smiled... “They’re going to make peace with every dragon… except that guy.” Is it a cheat? Sure. But it’s a good way to satisfy both our higher moral sensibilities and our need to see a little ass-kicking.

Agreed 100%. Bringing it back to "Harry Potter" again, I think it was a massive missed opportunity not to redeem Malfoy in some way. Even though he is "bad," he's just a kid -- too young to be truly evil, right? That said, one of the more intriguing things about Hogwarts, as an ideal, is that it explicitly includes an apparently evil faction (Slytherin) without necessarily trying to reform it. Perhaps Rowling achieves your generosity of moral vision in alternate ways.

As for wanting to satisfy higher moral sensibilities and get the ass-kicking we crave -- yes, "Return of the Jedi" does it perfectly. When Luke finally snaps and goes furiously apeshit on Vader, defeating him at last, we feel the release and catharsis of finally beating the stuffing out of the villain -- only to be abruptly reminded, seconds later, that what we'd seen only came about because Luke finally used the powers of the Dark Side.

That moment -- of "the hero realizes that he is vanishingly close from being no morally different from the villain" -- is supremely satisfying if pulled off well, because if the story is well-constructed, it will lead directly to a moment in which the hero makes the ultimate risk/sacrifice to prove that he isn't just like the villain (Luke throws away his lightsaber, faces the Emperor unarmed). If I remember correctly, RAIDERS OF THE LOST ARK does the same thing when Indy does not blow up the ark and allows the Nazis to take him prisoner after the villain Belloq's speech.

Haven't seen the new dragon movie yet (let's see, when did I last see a movie in a theater...I think there's been one since kid #2 arrived...?), but I really like this post.

Avatar had potential with the "enemies are actually the good guys" twist, but then the hypocrisy just switched to needing to kill newly-revealed bad guys...

"In order to redeem Vader, Lucas cleverly brought in the Emperor late in the game. Otherwise, the trilogy would have had to end on a hug and no fight."

What you mention are cheats, and feel like cheats (but we've gotten used to them). (Even worse is the cheat where the villain kills themselves, saving the hero from any moral dilemma and stain.)
The difference in SW6 is not the death of the Emperor - but the moment Luke notices Vader's robot hand (mirroring his own). Having used the dark side to defeat his adversary and at the door of finishing him off, he realizes he is at the gates of becoming like him. At that moment, he throws away his weapon, spares his enemy and proudly proclaims to be on the side of good. THAT is what makes this story so special in its hopefulness.