Watch it here.  The bastards won’t let me embed. 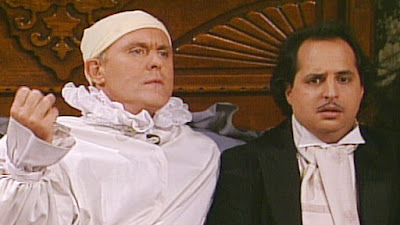 When we read our own work, we always imagine Denzel Washington or Meryl Streep performing the dialogue: The very best actors who can discover all the nuance and deliver the lines with the proper amount or subtle gravitas or dry wit. But you need to remember that your readers may not do you the favor of imagining those actors.

Readers, you must always remember, are inclined to distrust you and your work. They’ll assume that you’re a bad writer until you prove otherwise. (This is true especially for readers you don’t know, but, truth be told, it’s often true for readers you do know.) And because they’re assuming that you’re a bad writer, they’ll naturally picture a bad actor reading your dialogue.

This is especially true if they detect even a hint of pomposity in your drama, or schtick in your comedy: a switch will flip in their minds and they’ll say, “Oh, I see, this is that kind of dialogue, and the voice in their head will become as hammy as possible. At that point you’re poisoned.

So your goal is to never flip that switch. Your distrustful reader just needs to stumble over one overdramatic line to unleash Master Thespian on the rest of your dialogue. But can you force them to picture a great actor instead? If you give them no hammy lines, they can’t picture a hammy actor!

Reread all of your dialogue and remove all of the potential ham-triggers. If you can hear it in Master Thespian’s voice, take it out. Be ungenerous with your dialogue. Try to hate it, and then work on until it’s hard to hate, no matter how hard you try.

This is not entirely hypothetical for me. I’ll have a very real-world reminder of this phenomenon soon. I wrote a play (kind of co-wrote, but we need to work that out), and a friend offered to have it read aloud by his actor-y friends at a small gathering, so I did a quick reread and rewrite of it, and frequently found myself freaking out. Can any of this survive being read aloud by a group of friends, who may or may not be taking this particular challenge seriously? At what point will the room turn on the script? What line will be the tipping point?

(Okay, this is weird, but I just realized something as I typed the above. In the play, which is based on a true story, there’s actually a scene where a theatrical troupe turns against a play they’re performing and starts to ham it up after a few bad lines cause them to lose respect for the text. So it’ll be pretty goddamn meta if that happens in person.)

So I tried to slice out all the ham. I’ve tried to force a possibly-flippant group of performers to respect the text, maybe against their natural inclination. That’s a high standard to hold yourself to, and so it’s a great trick to make your writing better.
Posted by Matt Bird at 12:00 PM

Labels: How to Re-Write, Storyteller's Rulebook

I am the friend who's putting on this reading! It's me! Give me credit! What are you, ashamed of me?!?!

Speaking to the meat of your post, I don't buy it. It seems like such second-guessing would make for timid, defensive writing. You have to take risks! I further disagree that the audience is disinclined to give your book or movie the benefit of the doubt. Everyone sits down to a movie or to read a book hoping it will be good. They've already paid their money, they've already made their investment of time, there is a certain amount of goodwill that you can draw upon. I think that assuming that the audience doesn't like you from the beginning, and therefore you must aggressively win them over from the outset, makes for some sweaty and desperate choices. It's better to act like you belong there, and proceed with that kind of self-confidence.