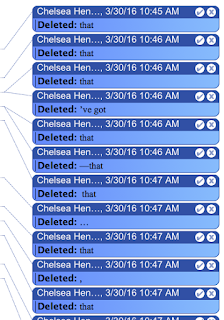 Thanks so much, guys, crowd-sourcing the revisions of the book has been so fun! Since we last spoke, I finally got my edits back from my editor, which is thrilling but weird. The edits are great, but it feels like coming home to discover that someone has been in your house, touching your stuff. Of note: Either she has a pronounced hatred of the word “that”, or I have an perverse addiction to it, or both.

One issue that comes up in the notes in this: Writer’s Digest books are aimed at aspiring novelists moreso than screenwriters, but I'm still over-relying on movie examples. So if you’re willing to keep helping me out, I thought we might try something new: I’ll share with you some places in which my editor wants some more book examples, and you can help me brainstorm.

Of course, this brings us to one of the big reasons I tend to focus on movies rather than books. Because there are a limited number of movies released, we all tend to see the same ones, and we all tend to agree on which ones are great, but books are totally different: Readers tend to have their own niches, hundreds of well-reviewed books come out every year in every niche, and individual reader taste varies much more than moviegoer taste.

If you’re talking about books that can be cited as examples, you have a pretty small list: On the one hand, you have high school lit: Austen, Dickens, the Brontes, Fitzgerald, Steinbeck, Morrison, etc. On the other hand you have those few bestsellers so big that they cross over to all readers: Rowling, Collins, Larsson, Flynn, etc. So it’s tough! Can you come up with examples that enough people have read?

So let’s try it! Here’s a typical list from the book illustrated solely by movie examples. 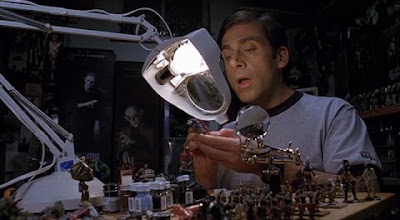 Not all conflict is created equal. Genuine conflict occurs when characters don’t want to do something, for reasons such as these:
For any of these five, can you help me come up with a book example, citing a book that most of us have actually read?

Lord of the Rings. (Which also has the benefit of being a movie most people have seen.) When Frodo agrees to take the One Ring into Mordor, he not only undertakes a perilous journey, he agrees to a path that could see him become a twisted servant of the Ring's evil power.

Game of Thrones. Robb Stark, a prideful and honourable man, wages war against the Lannisters (difficult and dangerous), but must agree to a literal marriage of convenience in order to bargain passage through the territory of Lord Frey. (It all ends badly.)

A Wizard of Earthsea. Ged has to chase the shadow being he accidentally unleashes, but in order to defeat it, he has to admit its true name: Ged.

Catch-22. If you're insane, you don't have to fly combat missions. But if you apply for such relief, you're showing rational concern for your safety, and are therefore sane.

The Shining - little Danny knows that the hotel is dangerous but his father desperately needs the job, and he doesn't want to scare his parents with his psychic abilities.

Brian Malbon said...
This comment has been removed by the author.
8:39 PM

This is pretty hard. Maybe it's not as vital an element to prose stories? It's still a great element, though. It certainly applies to a certain type of story.

The Godfather: Michael Corleone wants to protect his family, which will require that he destroy the life that his father intended for him, the life he truly wants to live, and become hopelessly embroiled in organized crime.

Huckleberry Finn: Huck wants to help Jim escape, but in doing so he has to defy everything he's been taught about the world and God Himself. One of the great dramatic resolutions to a dilemma in literature:

I felt good and all washed clean of sin for the first time I had ever felt so in my life, and I knowed I could pray now. But I didn't do it straight off, but laid the paper down and set there thinking- thinking how good it was all this happened so, and how near I come to being lost and going to hell. And went on thinking. And got to thinking over our trip down the river; and I see Jim before me, all the time; in the day, and in the night-time, sometimes moonlight, sometimes storms, and we a floating along, talking, and singing, and laughing. But somehow I couldn't seem to strike no places to harden me against him, but only the other kind. I'd see him standing my watch on top of his'n, stead of calling me, so I could go on sleeping; and see him how glad he was when I come back out of the fog; and when I come to him agin in the swamp, up there where the feud was; and such-like times; and would always call me honey, and pet me, and do everything he could think of for me, and how good he always was; and at last I struck the time I saved him by telling the men we had smallpox aboard, and he was so grateful, and said I was the best friend old Jim ever had in the world, and the only one he's got now; and then I happened to look around, and see that paper.

It was a close place. I took it up, and held it in my hand. I was a trembling, because I'd got to decide, forever, betwixt two things, and I knowed it. I studied a minute, sort of holding my breath, and then says to myself:

Going back to the well of high school required reading, you could probably pull something from To Kill a Mockingbird with Scout coming around to supporting her father despite the weight of the town coming down against him? (I haven't read it since the Eighties, but I think that was part of it.)

1984: Winston Smith wants to assert his individuality and humanity, which is not only difficult due to the machinery of the state but also due to the lifetime of programming he'd received.

I second Hamlet, he has both the uncertainty of whether he is going mad, but also misses the easiest chance to kill his uncle when he is praying (because Hamlet is worried that this means his uncle will be divinely forgiven).

Game of Thrones also has a strong one, where Ned Stark could have exposed the secret of the Lannisters incest, but doesn't do so in time because he knows this will mean the Lannister children will all be killed.

I don't know if it's what Writer's Digest wants, since it's plays, but Shakespearean tragedy in general seems like a great place to go.

I could go on, but it would require me to do two seconds of googling, so I won't.

Fahrenheit 451: Guy Montag tries to save books, which goes against the society that raised him.

The Great Gatsby: Nick Carraway brings Jay Gatsby and Daisy Buchanan together, even though he knows he shouldn't.

Crime and Punishment: Raskolnikov is made of dilemma.

Fantastic! Thanks so much, guys.