In Rushmore, at what point does Max Fischer finally turn a corner, get a girlfriend, and vow to make peace with everyone? Well, we don’t know, because we don’t see it. Instead, we see just the opposite.

We do get to see some personal growth: He finally apologizes to Dirk (spontaneously) and Margaret Yang (when prompted), he starts his first new society at his public school, he reaches out to Blume and exchanges medals with him. He reaches out to Miss Cross again with another aquarium scheme. But then, after that falls apart, we see him ordering dynamite and heading off to Rushmore with a rifle: “I have one more piece of unfinished business.” We then see him in a window aiming the rifle at his bully. To our relief, he just shoots him with a potato gun, then gives him a script for a play.

Nevertheless, as the next scene begins, somewhat-ominous drum music plays and we see that Max has gathered all of the characters from the movie, both friends and enemies, in one room for his play. Of course, we soon realize that, while his Vietnam play is far from safe, his intentions are entirely positive and this is a different Max: He’s got a girlfriend, he’s introducing everyone to his father, and he’s implicitly making peace with everyone he’s wronged.

This is tricky. Audiences do like going back and forth, sometimes getting ahead of the characters (we know what’s going to happen to them but they don’t) and sometimes falling behind (we can’t figure out what they’re doing for a few scenes), but this movie features false alienation: Intentionally making us doubt our trust in the main character, only to please us by re-affirming it.

In this case it works: it adds a little tension and excitement to an ending that might otherwise be anticlimactic. Yes, it’s a little disappointing that they have to skip over some of Max’s personal breakthroughs, but it’s a comedy, not a drama, and we’d rather get an nervous final laugh than a heartfelt catharsis. 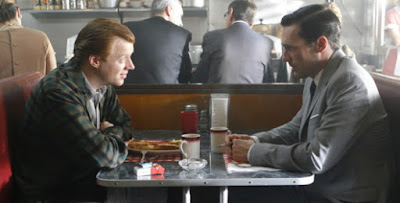 In other cases, it doesn’t work: There’s a moment in the first season of “Mad Men” when Matthew Weiner decides to create the false impression that Don is preparing to kill his half-brother (instead, he’s going to pay him to leave town, which, as it turns out, causes him to commit suicide.) It’s essential to build identification with anti-heroes: We can’t sympathize, but we can at least empathize. By breaking identification in those scenes, Weiner briefly pushed our already-limited tolerance for Don past the breaking point, and struggled to get it back. When I recommended the show to people after that first season, I warned them about that episode: “At times the show will seem darker than it really is, but stick with it.”
Posted by Matt Bird at 3:14 PM