Am I Fair? Day 2: The Mostly Lethal Weapon Edition 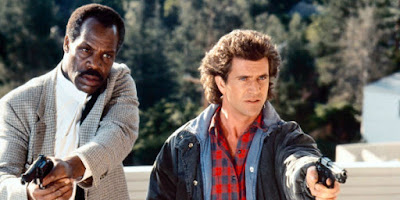 Hi guys, welcome back for day 2! If you’ve just joined us, we’re looking at some of the things I say about movies in my upcoming book, and I’m asking for your help: If you’ve seen these movies and remember them well, then would you say that these descriptions are scrupulously accurate? And are the judgments fair?  Today we have two Lethal Weapon movies and Ocean's Twelve:
Tomorrow: The final four, for now
Posted by Matt Bird at 8:00 PM

I haven't seen any of the Lethal Weapons for a really long time, but I totally don't recall the bad guys ever saying they killed Mel's wife. I remember them saying they killed his new girlfriend, but I think that was it, wasn't it?

To the best of my knowledge that's correct about Ocean's 12. No real set-up or foreshadowing I don't think - there's just the montage about the egg being in some guy's backpack on a train and whatnot.

Most of Ocean's 12's problems can be traced to Soderbergh's decision to buy an original script called Honor Among Thieves and revamp* it into an Ocean's sequel. (Apparently he really wanted to shoot in Rome, and H.A.T. was set in Rome and had "Thieves" right in the title, so...)

On top of that confused concept, the screenplay had to accommodate all of the original team members, plus Andy Garcia, Julia Roberts, Eddie Izzard, Cherry Jones, Topher Grace, and all the characters native to the original story. There was no time for plot OR character, so there was also no time to properly set up the twist.

At least Soderbergh learned from the experience. When Ocean's 13 turn came around, Soderbergh did the smart thing and adapted the script of a much-loved ensemble heist comedy called Ocean's 11.

*(As it happens, a script for Lethal Weapon 4 became the script for Die Hard: With a Vengeance in much the same way. That's why McClane suddenly has a partner and the villain suddenly has an unnecessary connection to the first movie.)

I didn't know that about Ocean's Twelve! Explains a lot. And yeah, 13 was just a retreat of 11. (And add Catherine Zeta-Jones to your list of added actors)

Die Hards 2, 3, and 4 all started out as non-Die-Hard stories, so Die Hard 5 was the only story ever conceived as a sequel to Die Hard.

I'm not sure about the villains of the first Lethal Weapon claiming responsibility for the death of Mrs. Riggs. That sounds familiar, but a quick check of Wikipedia, everyone's most trusted authority, claims that the Big Shocking Reveal came only in LW2.

The Big Shocking Reveal in LW2 proved to be a case of hilarious timing. The movie came out in 1989, the very same year that the movie Batman had a Big Shocking Reveal that Jack "The Joker" Napier was also the thug who had killed Batman's parents! GASP!

Checked the script for LW1, and Wikipedia is correct, Harvey. The villains in LW1 do not claim to have killed Murtaugh's wife. It's only the villains in LW2 who say that.

I've seen the LW movies more times than I care to admit (hey, I grew up in the 80s!), and I too have no memory of the LW1 villains claiming to have killed Gibson's wife. LW2 is just completely bonkers, and I think you've captured it well. Even as a kid (and even as I cheered on the scene) I could see the logic-hole of Danny Glover's "has just been revoked" line. Wait, wasn't the whole point that they *couldn't* revoke his diplomatic immunity? I was very confused.