Am I Fair? Finale!

Welcome back for the 3rd and final day! Once again, if you’ve seen these movies and remember them well, then would you say that these descriptions are scrupulously accurate? And are the judgments fair?  Today we have the final two, and then a super-tough final challenge:

And now for the real stumper. A few times in the book, I quote writers’ commentary tracks and DVD docs, and now that I have to confirm those quotes, it’s driving me crazy tracking them down.  (Thus this post)  With Back to the Future, I watched all three hours of docs and listened to Bob Gale’s commentary track to no effect, until I found he had a second unlisted commentary track that had the quote! 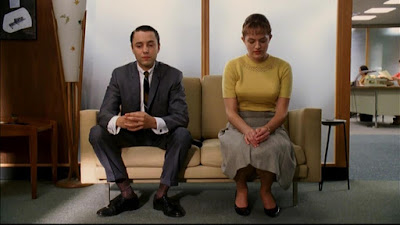 But this next one has totally defeated me.  Here’s the quote from the book:
But for the life of me I can’t find this quote to confirm it.  The problem is that there are a lot of Pete and Peggy scenes.  Every time I think I’ve found the right one, the quote isn’t there in the commentary.  I realize that this is a lot to ask: Did any of you watch these commentaries?  Can you point me to the right episode?  To ask the question is to answer it: Of course you can’t.  But now at least you can pity me. (It’s not the scene pictured above, by the way.)

Next week: You get to vote on which questions to chop out of the checklist!
Posted by Matt Bird at 8:00 PM

The "Mad Men" quote you can't find (I don't have the DVDs, so I can't help) could be rejiggered by instead citing one of Alexander Mackendrick's maxims, which you can quote from his book and your own post: 5. BEWARE OF SYMPATHY between characters. That is the END of drama. Peggy's failure to feel sympathy for Pete pushes the drama forward as well as humanizes the scene, creating empathy for the oft-repellent Pete Campbell without sacrificing our fondness for Peggy Olsen. She's just doing what people do; unfortunately, Pete needs more than that right then. Who cannot relate to both sides?

Was The Great Debaters lack of irony devastating to its quality? Its aim must have been to allow the audience to feel reassured and righteous rather than challenged or thoughtful. It was about stripping away complexity, not reflecting it. There's a huge market for that, and some people love it. It's a wholly different way of approaching drama than the one you champion. Do you get into those alternative approaches in the book? Acknowledge them, get into their pros and cons a little?