Straying from the Party Line: The Selfless and Self-Less Heroine of The Babadook 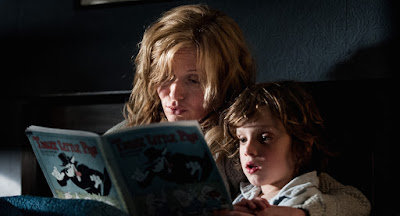 Is there ever a good reason for a character to have generic dialogue? Yes, The Babadook is one movie that gets away with it.

In my definition of metaphor family, I say that it’s drawn from the hero’s job, background, or developmental state, so I guess that this could include the simple job of “single mom”, but ideally we want something more. The heroine here has fairly generic mom dialogue:
So that’s bad, right? Well, not necessarily. Once again, let’s go to an interview with writer/director Jennifer Kent:
So Amelia’s lack of personality is central to her flaw, and to the movie’s commentary on the wider world. Of course, we don’t know that yet as we watch it, so Kent had to do everything she could to keep Amelia from bugging us too much in that first half-hour. Here’s what she did:
In other words, Kent knew from her note-givers that the lack of specificity and humanity on the part of the character would make her hard to identify with at first, so she knew that she’d have to find an extraordinary actress that could provide the heart and soul the character seemed to lack. If you’re going to break a rule, you have to know the danger you’re putting yourself in and have a plan for overcoming it.
Posted by Matt Bird at 8:00 PM

Labels: Character, Straying From the Party Line, The Babadook

This reminds me of your observations on Gone Girl - that the supposed gut-punch of the later acts was undermined by the choice of an actress whose performance lacked the necessary warmth to dupe us in the early acts.