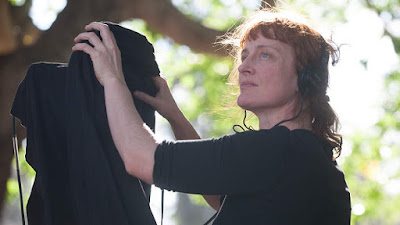 For the upcoming pieces on The Babadook, I’ll be relying heavily on the great interviews that Jennifer Kent has done to promote this movie, because she talks about herself and her art more perceptively and more honestly than just about any of the other writer/directors whose work we’ve looked at.

It’s interesting to look at her statements about the development of the movie, because they exemplify one of the dangers I singled out in two posts a long time ago. On the one hand she talks a lot about protecting and purifying her individual vision:
This sort of talk is catnip to both fans and potential creators. Fans love it because it convinces them that they’re not watching some work-shopped product, but rather an unadulterated vision that flowed right from God’s brain into their eyes. Aspiring creators love this talk even more because it feeds our suspicion that we don’t need notes after all: Don’t adulterate our vision, man!

But rather than get seduced, it’s always important to keep your head on your shoulders. Wait just a second, what’s that other thing she mentioned in passing in one of those interviews?
So she did listen to the naysayers, up until a point. At what point do you say, “Okay, this is it, all of these notes have been great, but at this point I have to declare it done and start defending what I have”? Kent picked just the right moment. She let herself be talked out of all of those too-out-there scripts and found something instead that was contained and intimate, but then, once she was fairly certain that she had finally nailed it, she started digging in her heels and fighting for her vision.

The problem of course is that most aspiring writers start fighting too soon. We fight to defend the “purity” of those too-out-there ideas, because we think that that’s what writers do. We pay attention to those first four quotes from Kent, and skip right over that last one. Knowing when to take your stand is one of the hardest calls in life.
Posted by Matt Bird at 11:44 PM

Labels: How To Get Ahead, Rulebook Casefile, The Babadook

I think you kind of have to get those "out-there" ideas out of your system first - then read over your first draft and let the growing dread let you know you've gone too far. Then you can step back and see what the essence of what you were trying to say was and bring it back down to a reasonable level. With my novel the first draft was complete nonsense, but by cutting out the dross and focusing on the core relationships between the most important characters I was able to make it what I always wanted it to be in the first place.
I think once you have something that you personally can read over several times and think that is actually good, then it's worth fighting for.

I don't know, I've gotten to that point, but then everybody hated it. I think that you have to get to the point where it's liked by everyone whose opinion you respect, and only then starting pushing back against the people whose opinions you don't trust.

I know the feeling!