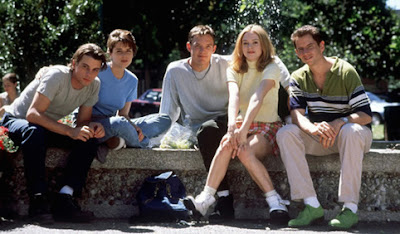 As you may remember, the results of the poll were all over the map, so I randomly picked Scream. But then I rewatched it.  It remains a very entertaining movie, but there were problems. One was what I had warned about: The first fifteen minutes are terrifying, but after that it’s never scary again, and works instead as a thriller/murder-mystery/spoof. But the other problem was something I’d totally forgotten: The movie is soooooooooo dated, in a Pulp Fiction “ironic tone” kind of way.

In my memory, only the Jamie Kennedy character was obsessed with movies, but no, every single conversation in the entire movie is filled with meta-references to movie-going, both overt and covert. Everybody talks about the horror movie rules. The teens even talk about having sex in terms of moving their relationship from PG-13 to R. It is, in short, very much a product of its time, and not the sort of thing that’s worth emulating today.

So I moved on to the list of unseen movies, and finally caught The Babadook, and wow, it’s brilliant.  The one problem is that it’s very similar to The Shining, which I’ve already done, but I have too many interesting things to say about it to let it pass, so I’ll do that one, but I’m behind now, so let’s do it next week.

I may still have two more posts this week because there are two things that aren’t up to me in terms of when they post: A great new episode of the Narrative Breakdown podcast will go up soon, and I’ll find out when I can make a big announcement of my own! So stay tuned!
Posted by Matt Bird at 10:56 PM