Straying from the Party Line: The Lack of a POV Character in Weeds (and Why Satire Must be Center-Cut) 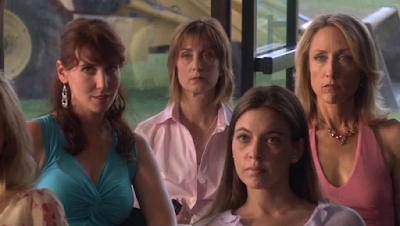 One distinction we’ve made is between shows where the hero is also our POV character, and those in which they’re different characters. Another distinction we’ve made is between premise-pilots (the ongoing situation is established for the first time) vs “center-cut” pilots (the situation is already ongoing and the pilot is a fairly typical episode).

Premise pilots have less need for a separate POV character, because we can get up to speed as the hero gets up to speed (think of “Buffy”), but in center-cut pilots, the hero already knows what he or she is doing, so a natural way for the audience to figure out what’s going on is to have a separate character who is getting to know the hero’s world for the first time (Holly in “CSI”, Peggy in “Mad Men”)

We looked at one previous show that was center-cut without a POV character, “24”. That show used a variety of tricks: it cut back and forth between two worlds, giving us each one’s perspective on the other, and when that failed they simply gave us information with on-screen titles.

“Weeds” is another center-cut pilot without a POV character, but it pulls this off in a more traditional way: it gradually sprinkles in the establishing information we need to know.
This sort of casual mentioning of all the necessary facts is very hard to pull off. I think that most writers (not just TV) begin projects intending to catch the audience up on the fly, only to quickly realize that the casual fact-dropping just sounds too fake, at which point they add either a POV character or some kind of framing element (voiceover, or intercutting with therapy or interrogation, for example)

But Kohan writes fantastic free-form dialogue, so she’s able to stick with it and for the most part makes it work. Some of the information is not dropped as casually as it should be, or contains a little more information than the character would actually include in this situation, but we give it some leeway.

After all, what were Kohan’s other options?
Besides, in the years since this came out, voiceover has become too much of a fall-back for TV, and I find it refreshing not to have one here. I loved the Mr. Robot pilot, but more than once he narrated something in voiceover that was identical to what happened onscreen. 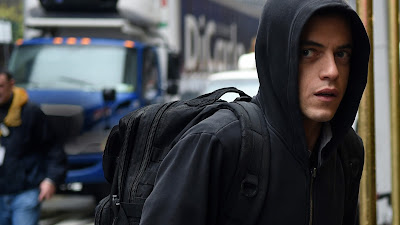 Instead, Kohan tackles the difficult task of catching us up on the fly, and pulls it off well.
Posted by Matt Bird at 5:31 PM