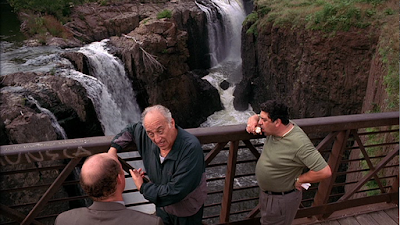 So you love a genre/setting, but you’re fed up with its phoniness and clichés. You want to inject some realism back into this world. To begin, you’re going to need one of two things, and preferably both:
Now you have dozens of authentic observations, so what do you do next? You identify the gold: You’re looking for details that have some combination of these qualities:
That said, it’s easy to make a big mistake here: It’s always great to use authentic observations to add new bits of realism into this world, but that doesn’t mean that you should subtract the unrealism!

As I’ve said before, writers often falsely believe that audiences are sick of genre conventions. In reality, audiences will demand that you satisfy most (but never all) of those conventions, albeit in a way that feel new and unclichéd. Use your research to make those tropes feel more fresh and realistic, not to do away with them.

Movie and TV executives love to meet with story consultants with real life experience who can regale them with too-crazy-to-be-fake anecdotes and tell them the inside dope about how it really goes down, but they will suddenly turn cold as soon as those consultants start saying things like: “They don’t really do that kind of thing,” or “they wouldn’t be that dramatic,” or “it’s not all hyped up and life-or-death stakes like it is in the movies.”

So what do you do instead? Look at the storyline in the “Sopranos” pilot in which a gambling-addict HMO exec can’t pay his debts so he is forced to submit phony claims that will pay out to Tony’s crew. As Chase says in the DVD commentary:
So Chase is taking away one hoary and utterly unrealistic trope (his mobsters will never show up out of nowhere and demand a cut of any business) but he gets away with it because he replaces it with a more realistic version that satisfies the three criteria above:
The big lesson of the 2008 financial crisis was that a bank doesn’t consider your debt to be a liability, they consider it to be an asset. The only thing worse than a borrower who never pays them anything is a borrower who pays back everything right away. This suddenly became very clear after the crash, but we could have learned it much earlier if we’d just paid more attention to this show.

Crucially, this realistic new detail still plays out in an unrealistic fashion: Pussy and Hesh don’t just call up the HMO guy and say “You’d better be careful or the man with green eyes will come and see you,” as they would in real life, they take him over a waterfall and make it clear that they’re about to throw him in. We love that it has added realism, as long as we get to keep the fun genre unrealism that we also love.
Posted by Matt Bird at 2:40 PM

For me this is the heart and soul of great genre writing. When I think of my favorite moments in procedural stories like GLENGARRY GLEN ROSS, TINKER TAILOR SOLDIER SPY or THE WIRE it's what comes to mind first -- details of the world that feel so true that even if they aren't strictly historically or technically accurate or sociologically documented, they feel like they ought to be. Like that f-bomb conversation at the crime scene in THE WIRE, something that David Simon never witnessed in real life but that he imagined _should_ happen in that kind of world.

There's a lot of hard observational work and research that goes into creating those moments. But it's also a pretty delicate matter of judgment and taste. It's almost always more about how or why something is done and what it does for the story than it is even the original motivating bit of research. I wonder if you can think of some illustrative examples of especially bad choices that feel like the result of poor judgment, failure to balance these needs properly or going too far in the direction of realism in a way that ironically plays unrealistically.

The first example that springs to mind is the recent bomb ALOHA. Apparently, Cameron Crowe actually met a red-headed white guy in Hawaii with the last name "Ng", who constantly had to explain that he was half Asian, and Crowe thought, "What a neat little real-life detail that sums up Hawaii and the modern condition! I'll add a love interest played by Emma Stone with the last name 'Ng'!" To put it mildly, the public didn't react the way he thought they would.

Such a thing was possible, and apparently actually happened, but it seemed phony and insulting onscreen. Instead of finding a detail that was representative of a larger issue, he found one that was very much UNrepresentative or the larger issue (racial diversity and Native heritage in Hawaii.) When he belatedly tried to explain that he hadn't actually cast a white actress in a role written for an Asian, nobody was mollified: it still rubbed most people the wrong way.

That reminds me of something I experienced several times in creative writing workshops. There would be a scene in someone's work that the class would describe as unbelievable, and the most common defense would be, "But it actually happened!" One of my professors said that in fiction, it was usually better to have some sort of emotional truth than factual truth. The example he gave was of a soldier jumping on a grenade to protect his comrades: it had probably happened, but it felt too ham-handed and sentimental to put in a war story, at least without a lot of justification and buildup.