Rulebook Casefile: Details from Life, from Research, and from Imagination in the Sopranos Pilot 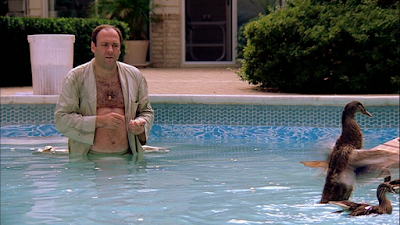 In the DVD commentary for the “Sopranos” pilot, creator David Chase discusses where each of his ideas come from, and shows how important it is to draw from your own life and your own research, as opposed to simply using your imagination.

Obviously, Chase is not a mobster, but he is Italian, so he’s able to draw on that. Above that, however, is simply the fact that he, like all of us, often feels like a criminal, as I said here:
In the commentary, Chase cites the fact that Livia won’t answer the phone after dark as a detail right out of his own life, as well as several other bits of dialogue. But it goes much further than that:
Nevertheless, there are also elements that come strictly from mob research:
That leaves one big detail that came solely from Chase’s imagination, and left him feeling embarrassed: The ducks. When it came time to shoot the crucial shot of the ducks flying away, Chase’s duck handler informed him such a thing could never happen: Ducks need at least a twenty foot taxiway to take off: they can’t lift straight up and fly out of someone’s pool. Chase was mortified. They had to fake the shot.

Does that mean that he shouldn’t have included the ducks? Of course not. It’s a powerful metaphor, even it couldn't actually happen that way. But it strengthened his commitment to drawing most of his details from real life.
Posted by Matt Bird at 8:00 PM