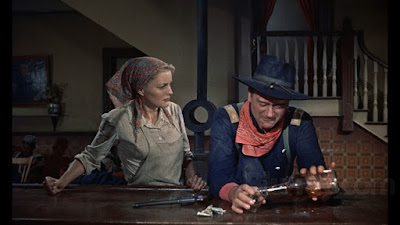 I just watched John Ford’s The Horse Soldiers for the first time and I was happy to discover that it’s a wildly underrated movie (Hey, remember when I used to write about those?)

It’s a rousing cavalry film with fantastic performances from John Wayne and William Holden, but it’s also a tragic portrait of America at its worst moment, and, as far as I can tell, one of only two theatrically-released Civil War movies in which, get this, the north are the good guys and the south are the bad guys! (The other being Glory. Are there any more?)

There were lots of moments in the movie that I loved, but, as a screenwriter, my favorite was a dialogue exchange between Wayne and Constance Towers. After having seized a Mississippi town in a fierce battle, the Union patrol has requisitioned a local saloon to treat the wounded.  As Holden, the field doctor, tries to save lives, Wayne acts disgusted and goes to the bar to get drunk. Towers doesn’t understand this and confronts him:
(Wayne eventually reveals that his wife was falsely diagnosed with a tumor and killed by the unnecessary operation.)

Finally, a movie that acknowledges the way that real people use metaphors: ineptly! (Especially when they’re drunk and prone to high-horse putdowns.) If you’re searching for ways to make your dialogue more realistic, this is how you do it: have them talk as if nobody has written down what they’ll say before they say it.
Posted by Matt Bird at 12:00 PM

I haven't seen this one yet and you've definitely put it higher on my queue, but I agree that some of the best stuff in Ford's films are these moments of true to life dialogue, where people don't always say the perfect thing, where all the through lines of thought, image or metaphor don't necessarily get followed, polished or even finished. My favorite example of this kind of thing is still the moment in MY DARLING CLEMENTINE where Henry Fonda is about to unburden himself about his romantic dilemma at the saloon. He opens the bartender with: "Mack, you ever been in love?" And instead of just setting him up for a monologue or responding with some witty banter, the bartender just shuts him down: "No, I been a bartender all my life." Boom. End of scene. Who's ever done better than that?

I decided to watch it after seeing Peter Bogdanovich's DIRECTED BY JOHN FORD (The good news is that Bogdanovich's film is finally available on disk, the bad news is that he updated it for TNT with new interviews, so it's not the original). Anyway, Bogdanovich has this great epic montage where he points out that you can follow the entire sweep of American history in Ford's films, from DRUMS ALONG THE MOHAWK to THE LAST HURRAH. The clip from THE HORSE SOLDIERS there was very moving, so I tracked it down.

That MY DARLING CLEMENTINE quote is great.

Inept metaphors were a running gag in the series BLACKADDER.

"We're about as similar as two completely dis-similar things in a pod."

The show was notorious for its brilliant dialogue, so when the normally cutting and eloquent Edmund Blackadder suddenly stumbled for words, it was hilarious. And revealing of his emotional state, yes, yes.

There was a show I used to watch called Pushing Daisies. Great show, and exactly opposite to this post. All the dialogue was very fast - no one ever had to think about what they were going to say half way through, even when they had large paragraphs of dialogue. It was as if they all knew there was a script, and had all memorized it. And I loved it. It was such a neat storytelling trick, and didn't detract from the action at all. In fact, it's made the show all the more memorable to me.

Can't let any mention of DRUMS ALONG THE MOHAWK pass without bringing up Edna May Olivier's outstanding performance as the tough-as-nails frontier grandma the Widow McKlennar. There's a similar character who appears briefly in the new MAD MAX film and steals every scene she's in. It's kind of impossible not to love a grandma who'd just as soon bake you cookies as she would send you to your maker if you took more than your fair share. There have been a number of great movies about American men of action who get too old for their milieu (anything from THE WILD BUNCH to THE STRAIGHT STORY), but where's the one about a badass grandma's last go around?