The checklist for Silence of the Lambs has been rewritten for version 5 and reposted in the new format, so let’s look at another rule hidden in this movie... 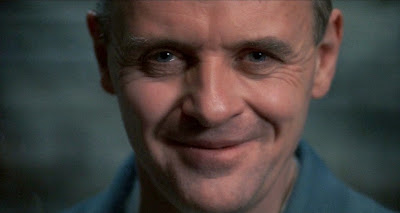 The scene where Clarice meets Lecter in Silence of the Lambs is a masterpiece of tense and compelling scenework. To understand how great it is, we must remind ourselves of just how weird it is.

Let’s imagine some of the more traditional ways this scene could have gone. An FBI rookie is searching for a serial killer on the loose, so she interviews an imprisoned serial killer to see if he has any tips. The scene needs to be tense and compelling, with a ticking clock, right? Here are the obvious ways to do that…
That makes for a pretty tense scene right? It writes itself! And it’s probably pretty realistic, too, so that’s even better. But what if we skip over all the obvious sources of tension, ignore the most likely real-life scenario, and instead imagine something totally unexpected?
This is totally counterintuitive, but it works much better. The result may be less realistic, but it’s far more entertaining, fresh, and creepy.

In the DVD extras, Hopkins arrogantly says that no American actor could have played Lecter, because Americans are trained to make their characters organic and understandable, whereas British actors are willing to create characters externally, concerned more with the audience’s psychology than their own. His Lecter is essentially an inhuman devil: we’re not getting inside his head, he’s getting in ours.

To write this sort of scene, you can start with the question, “How would I feel if I’d been locked up for so long?”, which is fine, but it can also work to simply approach the scene externally, asking, “What sort of human monster have we never seen before? How can I create a scene that’s scary in an entirely different way from what the audience would suspect?”

Crucially, Lecter remains three-dimensional and believable, because (novelist) Harris, (screenwriter) Tally, and (actor) Hopkins have given him a clear (albeit demonic) internal logic, but he’s not a character that you would arrive at by putting yourself in this situation, or even by reading the literature on typical serial killers. This story doesn’t “write itself”, because Lecter is an entirely original creation.
Posted by Matt Bird at 8:00 PM

Well said. Are you watching BETTER CALL SAUL yet? I think this kind of writing -- asking yourself what the "good" version of the dramatics in the scene would be, then skipping over obvious beats and worn-out scenarios to come to something that's fresh and totally unexpected while at the same time honoring the dynamics of that initial discarded idea -- is something that Vince Gilligan really excels at.

Always strikes me as the biggest difference between a script that will never get made and a movie - are there handfuls of scenes that are not trite? It's gonna be a movie! Note that the inverse doesn't hold true.