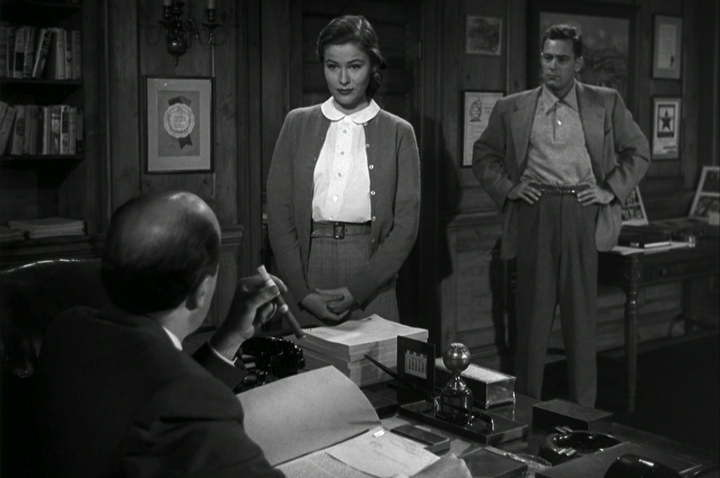 I’m in the process of reposting the Checklist Roadtests with better formatting and rewritten for Checklist v5, along with new thoughts on the movies. The new Sunset Boulevard Checklist is up, so let’s look at  one amazing scene from the beginning which establishing six different necessary elements of a great story, all at once.

Down-and-out screenwriter Joe Gillis is begging a Hollywood producer for work, so the producer (Mr. Sheldrake, a name that Wilder re-used later in The Apartment) calls in his assistant Betty to get the coverage on Joe’s latest script. She comes in to deliver it, not realizing that Joe himself is the other man in the room:
So just in this one small exchange we get:
And the fact that all six of these are established in one scene demonstrates another rule: It would be so easy to have six different scenes to establish these six elements. The result would be a screenplay that was clearly too long, but hard to cut down because every element felt essential. The trick is always to hit multiple beats at the same time in one small scene and still feel effortless. As in so many other things, Wilder is the master.
Posted by Matt Bird at 6:05 PM

Love this. Seriously great post! Not that you don't post good things usually but every now and again a particular post will strike me right between the eyes. This is one of those.

Off topic but hey, this is the internet and I'm bored and obnoxious:

The picture accompanying this post shows William Holden's pants hiked up to a hilarious altitude. In ye olden tymes, men almost always wore a jacket with suit pants. Pulling suit pants up high and buttoning the jacket made a man's legs look longer, a desired look. The jacket covered the ultra-high waist, preventing you from looking like a goober.

As so often happens, the habit of wearing pants with waistbands up crazy-high moved outside of its intended usage and became common practice, jacket or no.

Men of that generation who wore suits were used to their pants riding high. Which explains why, to men of later generations, "waistbands up to your nipples" was a classic old-man fashion trait. Not a universal one, of course, but widespread enough to be a cliche. When my friends and I were kids in the Eighties, we joked that our waistbands would inevitably rise with age; if we lived long enough, our belts would go over our heads.

Alas, with the passage of that generation so too passed the "pants too high" fashion. Kids of today have to make different old-man-fashion jokes. (Not sure what they are, because I'm old now too and I don't get to hear them. [Shakes fist at passing cloud, mutters about socialism and the degeneracy of hippey-hoppety music])

Also: Wilder's the best and Sunset Boulevard is a goddamned masterpiece and the book Conversations with Wilder is a tremendous read. I know you know, but I felt the need to say it.

Also off-topic: One thing I had never realized until listening to the commentary is that Holden was a forgotten has-been when this movie came out. He had an auspicious debut with GOLDEN BOY in 1939, but he made nothing memorable in the next 12 years. Immediately after the success of this movie, of course, he appeared in tons of well-remembered movies (BORN YESTERDAY, STALAG 17, EXECUTIVE SUITE, SABRINA, PICNIC, BRIDGE ON THE RIVER KWAI, etc) so it's easy to forget what a brave thing it was to pick him out of obscurity for this movie.

Let's not forget THE WILD BUNCH, which was like the caper to his career after that great born-again you run mention.

Oh sure, NETWORK too, I was just pointing out that the movies I listed all happened within five years of this one, which obscures the fact that this was daring casting.