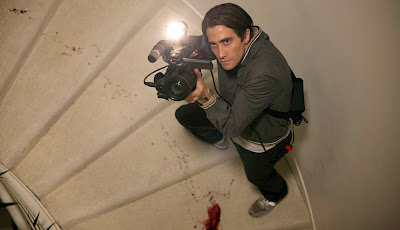 Tap Into Real-Life National Pain: There’s been a lot of talk about the whiteness of the Oscar picks this year, both in terms of the snub of Selma’s star and director, and in terms of the lack of black roles that were available overall. The best place to examine this problem, it seems to me, is not by looking at Selma nor its natural counterpoint, American Sniper. Instead, the movie that really lays bare the underlying problem here is Dan Gilroy’s intense little thriller that also works as a brutal parable about the modern vampire-squid economy.

I share the anger about Hollywood’s narrow-minded young-white-male obsession, but, as with almost any protest from either the right or left in America, the discussion always puts the blame on “the culture” instead of actually examining the systems in place. Frequently, people seem to be asking, “Why doesn’t that executive who makes twenty movies a year deign to have some of them be about women/minorities/older people?” And nobody ever speaks up with the correct answer: Because he died forty years ago.

An incisive discussion of Hollywood’s young white male problem has to include an understanding of how Hollywood itself has essentially ceased to be. Like most American corporations, Hollywood studios have figured out how to shift all the risk outward and all the profits inward. All development in Hollywood is now done by independent producers, who spend years getting each movie made, with no “development money” whatsoever. Each movie is its own start-up, with the producers sinking a fortune in development costs out of their own pocket (or the pockets of their investors) in the hope of making that money back with a blockbuster. The studios, using their monopoly on distribution, then swoop in and “partner with” these producers, co-releasing the movies, and taking half of the profits for themselves. This is why every movie now has five “producer cards” up front.

So what does any of this have to do with Nightcrawler? Everything. Jake Gyllenhaal’s character is unable to find any regular job, so out of desperation he becomes an “independent contractor,” seeking out nighttime car crashes and selling the tapes to the morning news. At first, he naively treats all crimes the same, but the producer tells him she’ll pay much more for anything involving black or Latino crime in white neighborhoods. Soon Gyllenhaal has totally internalized these values, jovially mocking his assistant for wanting to tape a crime in a poor neighborhood.

The station has laid off its own cameramen and denies all responsibility for the actions of the contractors who have taken their place, creating a “race to the bottom”, in which both sides push each other to pursue the least common denominator of viewers without either side having to consciously make that decision.

The same thing happens on the big screen. Movies are increasingly hyper-focused on young white men because that’s the least common denominator of viewers, and it’s no one’s job to say, “hey, let’s serve another viewership with some of our movies.” There is no “our movies” anymore, there’s just “my movie”, and no producer wants to sink years of work into a risky proposition (or even a proposition that looks like it will make a decent-but-not-spectacular profit).

Louis B. Mayer (or somebody else, I can't find the quote) once said something like “Don't talk to be about ‘quality pictures’. Every week, 52 times a year, a truck pulls up and expects us to put new film cans in the back, and that truck driver isn’t going to wait to make sure that it’s a ‘quality picture’.” But of course his quote was disingenuous: Such a system was actually ideal for ensuring that each studio could cultivate multiple audiences (old and young, male and female) and even produce a few low-profit “prestige” or “social problem” movies, just to make themselves feel good. But if each independent producer is betting the bank on one picture at a time, the financial disincentives are huge, just as they are for Gyllenhaal’s character.

As far as I'm concerned, the only real solution (other than forcibly restructuring corporate America, which also needs to happen) is to do what almost every other country in the world does: have a federal film fund to commission movies that make less profit but take more risks and/or portray underrepresented communities. But of course here in America nobody is ever allowed to say, “they’ve already solved this problem in every other country in the world, so let’s do the same thing here.” Don’t you know that we’re exceptional?