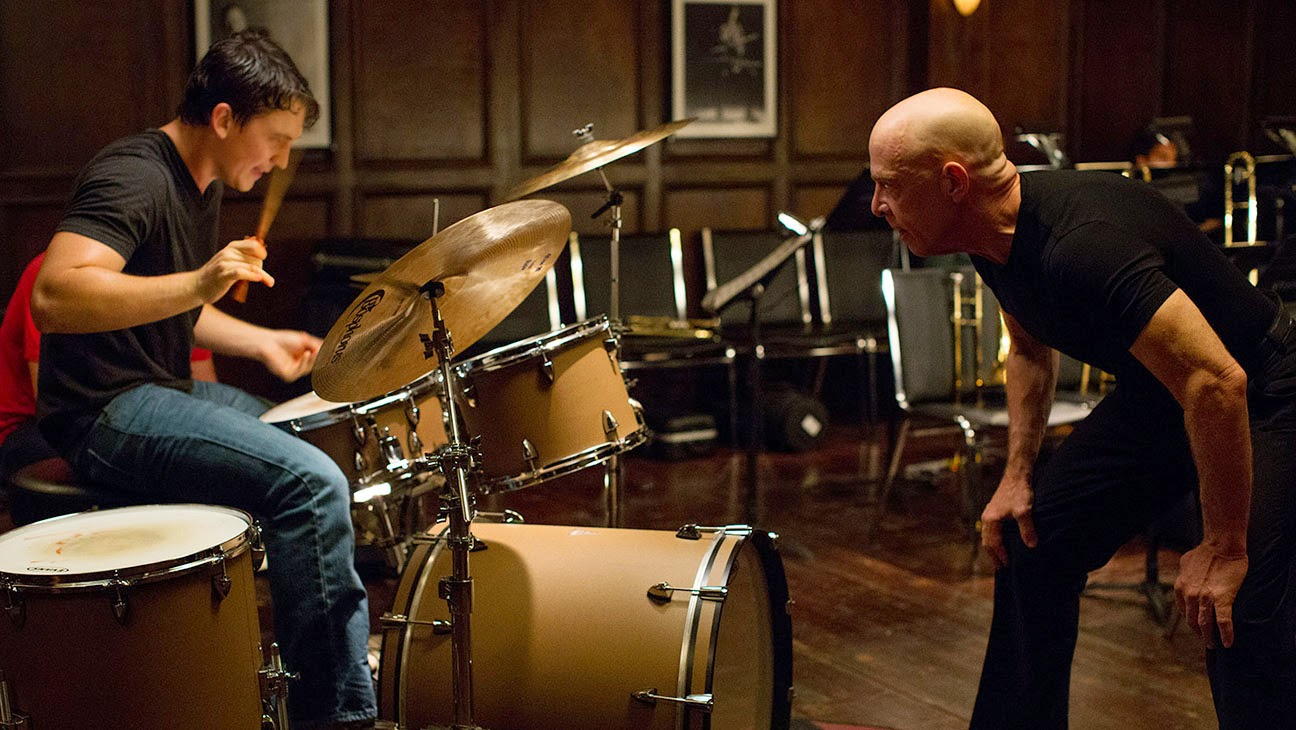 It’s shocking that this is only at #3, because this is one of the most intense viewing experiences I’ve ever had. My mouth was dry, my muscles were knotted, and I was on the edge of seat for two hours, and the ending only left me gasping for a catharsis that never came. This is a movie you have to “come down from”, waiting nervously for your pulse to slow back down.

Let’s look at some of the rules that this movie exemplifies:
Next: A movie that was a long time coming…
Posted by Matt Bird at 8:00 PM

I haven't seen BIRDMAN or WHIPLASH, though both are now on my list thanks to you.

Since I can't talk about those films I thought I'd mention a few of the better new films I saw this year that might be of interest to you and your readers but that probably didn't make your list:

Documentaries: THE OVERNIGHTERS (better to not know much about this one going in... A story about living one's faith among many other things), CITIZENFOUR (a real-life spy thriller and an absolute must-see), TALES OF THE GRIM SLEEPER (How can Nick Broomfield be a better detective than the whole LAPD -- because he hangs out, listens and cares) WHO TOOK JOHNNY? (John Waters put this on his Art Forum best-of list and boy was he right. Available to see for free legally for those who look for the link on its FB page).

Foreign films: FORCE MAJEURE (a far better and way funnier -- but no less dark -- film about marriage and disappointment than GONE GIRL)

Art films: A MOST WANTED MAN (the bleakest, most cynical Le Carre yet), A MOST VIOLENT YEAR (the best Sidney Lumet film he never made), FOXCATCHER (a film about two people drawn together by the wish that they could both be a third).

Genre films: THE GUEST (a BOUDU or TEOREMA for our time via early John Carpenter), THE SACRAMENT (a necessary dramatization of the unimaginable happenings at a place like Jonestown), BLUE RUIN (perhaps the best anti-Indie film I've ever seen... standard Indie plot and tropes + unexpected outcomes via a new genre context)

I've seen absolutely none of these-- some of them I've meant to see, and others I hadn't heard of. (And I was somewhat wary of VIOLENT YEAR and FOXCATCHER, for some reason.)

I used to be absolutely crazy for Nick Broomfield's documentaries ("movies about lowlifes made by a fellow lowlife" was my enthusiastic description of them) but I haven't thought about him or watched any of his movies in many years. I have to track that down.

All I can say is that the new Broomfield film is, for me, easily his best and most mature, almost a summation of every good thing he's been working towards for all these years. The very dry British sarcasm is still there, largely in the beginning, but it soon gives way to a tone that is much more serious, as befits the subject matter, which isn't serial killing so much as the systemic racism and crushing poverty that enabled it.

Whiplash was a riveting ride. I was totally engaged and engrossed. I look forward to seeing it a second time, to see how I react when I already know about the various left hooks and feints that movie throws at the audience. Original and downright thrilling.

WHIPLASH actually is a visceral movie. not the least for showing how intense jazz music may still be felt and experienced in 2014/15. GREAT!!!
I do have problems with the ending, though.
as it is our little drummer boy Andrew finally lives up to the expectations and gains the respect of his teacher Fletcher. in other words Andrew has become a drumming monkey (like their shared, spectacular but historically irrelevant heroe Buddy Rich).

what Andrew should have done is - in my opnion - to snatch the ´studio´ band away from Fletcher and show them how to finally trust their own sensibilties, hearts and tempos. ... and thus inspire them to fly like a liberated ´Bird´-like unit.

btw.: funny to hear my most generous host Bird mistrusting the concept of ´greatness´ so much. were you not the man who suggested pretty strict advice "how to get ahead in film (or life)"?

a topic well worth reconsidering, I would think.

I recently had a similar discussion about the blog with a fan and I'll say the same thing I said there: I actually reject the idea that I'm promoting greatness. Instead, I'd much rather help people becomes dependably good than achieve some brief pinnacle of greatness. My advice on how to get ahead is all about humility, after all.

Another thing I like about WHIPLASH is that both of these jerks knows nothing about real jazz. I've have jazz drummer friends who have criticized the movie for failing to capture the nature and reality of jazz, but I think that's the whole point. Neither of these guys has any soul or swing. They're trying to nail technical perfection instead of feeling it. This is another reason that no matter who wins, they both lose. As I've said so many times: Don't get an MFA!

Loved Whiplash. One thing I really liked about this film was how it revealed the main character in these great, short scenes:

1. When the mc goes the movies with his dad and pours the candy in the popcorn and then eats around the candy--something about that felt like a nice detail in their relationship. Also how the dad encouraged the mc to keep perspective and the mc said he didn't WANT perspective.

2. When the mc has dinner with extended family and no one has any idea how great it is that he got accepted into this jazz band and so he points out the his cousin may be a star football player but only for a crappy team. You kinda feel for the mc and dislike him at the same time in this scene.

Great twists in this movie too, and great acting. Can't wait to watch it again, especially to study the character work more. I think you're right that we can't totally root for either character; the strength of the movie rests on our ability to be riveted by the characters instead.

Thanks for recommending this, Matt. I agree with everything you've written in your post.

This really is a great movie, and the central relationship between two collaborative artists both recklessly pursuing their own idea of excellence reminds me of the power struggle between Gena Rowlands and the playwright and director in OPENING NIGHT. I think Cassavetes manages to pull off a dramatic climax in his own film that is like a slow-motion version of WHIPLASH's final performance, somehow even more exhilarating/excruciating to watch and every bit as ambiguous.

Late to the party on this, but I just saw this movie and it was ridiculous and overwrought and fake as hell. Who punches through a snare drum? Who plays until their hands bleed and then keeps playing? (No drummer who wants to keep playing for very long.) Who gets hit by a truck and then tries to play anyway? What conductor who claims to be able to discern whether or not someone is playing in tempo from hearing less than 2 beats? And that long long long long loooooong drum solo at the climactic concert was unintentionally hilarious, I kept waiting for the camera to pan over to the other folks in the band, who must've been like eating sandwiches at that point, having conversations about what an asshole this stage-hog drummer is. Perhaps any one of those silly details could've been allowed on their own, but all of them together, plus so many more, make the movie feel deeply inauthentic. I'm not a drum nerd or a big musician but this movie's depiction of a world where a band could plausibly be motivated and led in the same way as soldiers or athletes rang really false. This movie was as campy and ridiculous as BLACK SWAN . . . indeed, it's a male BLACK SWAN! It feels like this is what non-musicians believe what playing serious music at the highest level is like, in the same way that non-writers might think that intense writing is like that scene in FINDING FORRESTER when Sean Connery is yelling at the kid, "Punch the keys!! You the man now, dog!!" or folks who haven't been to therapy think therapy is like that scene in GOOD WILL HUNTING where all the therapist has to do is repeat "it's not your fault!" at somebody until they make their tearful psychological breakthrough . . . the twists and turns of the movie were fun, I certainly enjoyed myself, but good lord, in terms of how musicians actually behave, the relationship they have to music, these folks were moon men, everyone might've been from outer space. Just to be clear, I'm not making quibbles like "he never would've set up his drum set with the tom like that, with the high-hat like that!" It just seems miles from any recognizable human nature. It's camp.