Rulebook Casefile: Ironic Sequence of Events in Do the Right Thing 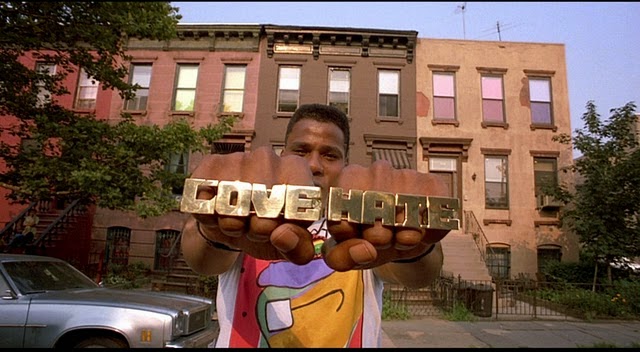 So we’ve established that Do the Right Thing has a very unique structure: Like most stories, it is about a large problem, but instead of watching a hero solve that problem, we’re watching the crisis slowly build, spotting a progression of factors that no one character can see.

Even so, only on subsequent viewings do we realize that almost every scene has contributed to the final crisis, often in very ironic ways.  Here, as I see it, are all the contributing factors, and where they come in the timeline:

So that’s almost everything right?  Even the seemingly happy moments, like the fire hydrant scene, ironically contribute the final tragedy.  But in fact there’s another, much smaller list of elements that don’t contribute to the crisis:

It’s crucial that these moments are included.  Unlike most stories, which assure us that we are following the linear progression of one problem, so that every scene “counts”, this sort of story must do the opposite: if we suspect that every element of this story is part on clockwork machine, the movie would feel grim and preachy: “Behold The Folly of Man!”

By interspersing the 23 elements that contribute with 6 that don’t, Lee keeps our eye off the ball, allowing us to just relax and enjoy this vibrant world, without having to feel that we’re riding a fixed escalator of racial tension.  We sense that something bad is coming, but we don’t know how or where it will arrive.  In fact, we cling to our hope that moderating influences like Da Mayor or Vito will ensure that things can’t get too bed.  This way, when everything finally goes to hell, it feels much more tragic that it would have Lee had merely set us up in order to knock us down.