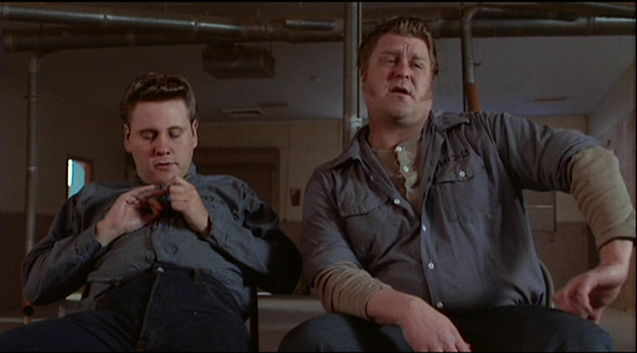 Raising Arizona is a beautifully-executed textbook case of the use of parallel characters. As with any new father, Hi is freaking out. Who is he now? How much should he change himself in order to become a better father? What’s the worst-case scenario, either way?

As always the best way to externalize these internal fears is through the use parallel characters. The movie centers around three couples: Hi and Ed in the center, Gale and Evelle (brothers, not spouses) on one extreme, and Dot and Glen (Ed’s sister and brother-in-law) on the other extreme.

Gale and Evelle represent Hi’s worst instincts writ large. When we first meet them in prison, they deliver the movie’s Hi’s false philosophy:
Unlike him, they have a plan for their lives all worked out: 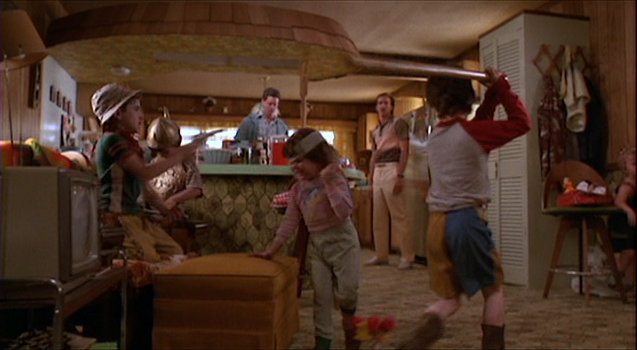 Meanwhile, Glen and Dot are equally satisfied with their life, blithely ignoring their awful kids’ destructive rampage, but this outcome is even less appealing to Hi, who can’t help but notice that they’re destroying his symbols of manhood: (Beating on his car with a stick, then shooting a squirt-gun at his crotch and yelling “You wet yourself!”)

If we had just one contrasting couple or the other, then the answer would seem too easy: a Goofus-and-Gallant choice between the right way and wrong way, but seeing these two equally-awful outcomes stresses how hard it is to choose the right path.

This movie has lots of voiceover, but we don’t need to hear what Hi’s worries are, because we see the two lives he fears most manifest themselves before his eyes.
Posted by Matt Bird at 7:00 PM