Straying from the Party Line: Telling vs Showing in Raising Arizona 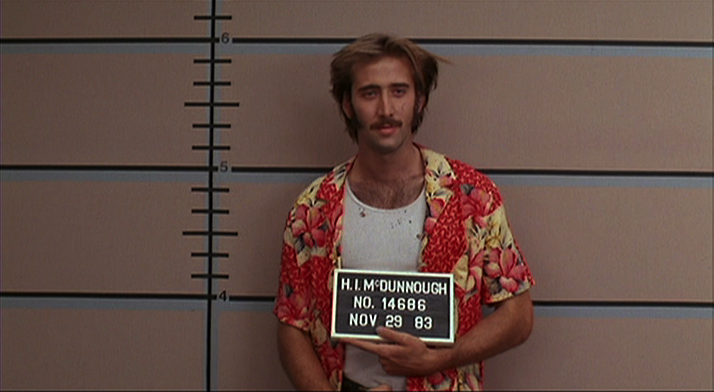 Deviation #1: The movie begins with a massive 10 minute voiceover montage in order to introduce its characters and launch its plot. This is the definition of a showing-not-telling: an undramatized info dump.

The Problem: This should be boring, stultifying and off-putting, denying the audience a chance to decide for ourselves what we think of this world and the characters in it.

Does the Movie Get Away With It? Very much so. Why? The short answer is: for the same reason that the Coens have been able to get away with breaking the rules ever since.
But let’s look at one last problem: in the very first Storyteller’s Rulebook, I talked about how audience are actually willing to have you tell them the plot (which this does in abundance) but they’re far more insistent that you show them who the characters are: Let us hear some dialogue and decide how much we like this guy, stead of being told to like him. As I put it then:
So why, in this case, are we willing to have Hi describe not only the plot but his character as well? Here it’s useful to look at the script. The Coens are famous for their meticulous scripting, and indeed this entire montage appears verbatim in the script …with the exception of one very funny line that was cut:
That’s a great line, so why was it cut? Because, in its attempt to make Hi more sympathetic, this line makes him less so. In the final film, we assume that he is going to jail for stick-up work, a more serious crime for which he offers no mitigation, but because he isn’t telling us that he’s not so bad, we’re more likely to reach that conclusion for ourselves.

So while this is clearly an example of telling-not-showing the plot, the Coens made the smart decision to show-not-tell character.
Posted by Matt Bird at 3:46 PM