Straying from the Party Line: The Tidy Conclusion of Raising Arizona 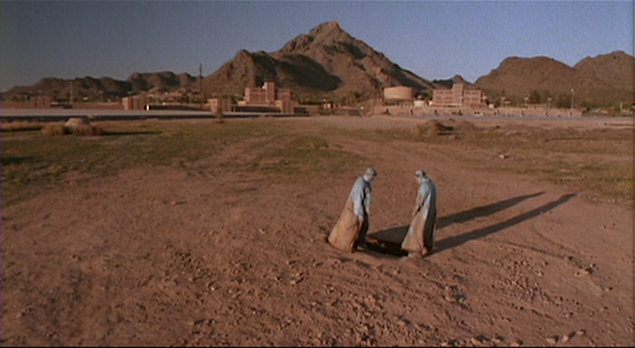 Deviation #2: The movie ends with another long voiceover montage in order to wrap everything up.

The Problem: This should also be off-putting, denying the audience a chance to decide for ourselves what everything means in the end. And by tying off all of the loose plot threads, we have less to think about afterwards.

Does the Movie Get Away With It? Somewhat, but it’s more problematic than the opening montage. Let’s start with the montage of what happens to all of the other characters. On the one hand, it’s delightful to see Gale and Evelle go back to prison by climbing back into the mudhole they climbed out of, but surely there was no need to show brother-in-law Glen getting his eventual comeuppance after telling a Polish joke to a Polish cop? 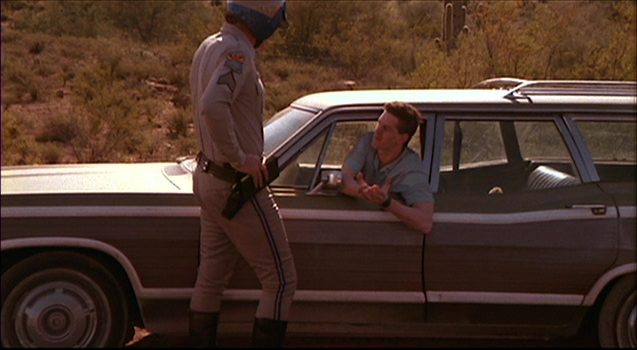 Recently, the Coens’ endings have been anything but tidy. For the most part that’s good: We enjoy the frustration of not knowing what happened to the money in Fargo or No Country for Old Men, for instance. One could argue that in their most recent movies they’ve actually take this a little too far in the other direction (see the anticlimactic endings of A Serious Man and Inside Llewyn Davis) but their recent instincts are still good: it’s better to trust the viewers rather than hold their hands at the end.

As for Hi’s summation of what happens to himself and Ed, the ending tries a little too hard to be satisfying by having it both ways:
This feels a little “80s” to me, like the Coens are being overgenerous to the their characters. This was still a point when indies were anxious to prove that they could be just as satisfying as Hollywood films. Don’t get me wrong, this is far preferable to modern indie movies, which too often equate “realism” with bleakness and misery, but I do wish that the Coens had trusted their bittersweet “root for Nathan, Jr. from afar” ending.
Posted by Matt Bird at 7:11 PM

But isn't the "Hi and Ed have kids" part of the ending both a dream and a joke?

It's been a while since I've seen the movie, but I could have sworn that Hi signals a transition at some point from talking about what did happen, tying up loose ends, to talking about his vision of what might still happen. It's not presented as fact, it's presented as Hi's imaginings. He's not narrating from some point near the end of his life, he's narrating from the perspective of right when the storyline of the movie ends. The very last shot is Hi lying in bed, not grandpa-aged but movie-timeframe-aged, and that further underscores that thoughts about the future are just the kind of brain-wanderings that happen as you're falling asleep.

And "Who knows ... maybe it was Utah." is one of the best punchlines a movie has ever had, completely undercutting any treacly sweetness the whole "Christmas with the kids and grandkids" sequence might have otherwise conveyed.

I'll not hear a word said against "Inside Llewyn Davis" at this table, young man.

I thought its ending was devastating, actually, not anticlimactic. He catches a glimpse of what he just barely missed being (Dylan) as he's going outside to get beat up again, and comes to realize that he is stuck in endless cycle of getting beaten up in that alley -- and I prefer to think of that as a metaphorical cycle rather than that he's in some kind of Groundhog-Day-esque repetition, although I guess that interpretation holds water too (though not as satisfying for me).

I just re-watched the ending and I agree with the "me" commenter above. The ending montage is unambiguously framed as a wishful-thinking dream. There is no split between "real consequences" and "another vague ending," as you said, it's all just a fantasy running through H.I.'s mind while he's laying in bed. That's why it's kind of heartbreaking -- you know he's never going to get this happy ending in his own life. "Was it just wishful thinking? Was I just fleeing reality, as I'm liable to do?" Everything is shot in a super-stylized, cornily perfect way -- the son effortlessly pushing his way down the football field, the Norman Rockwell thanksgiving dinner, etc. This is no different than Murnau's "The Last Laugh."

Comments! I'd forgotten those existed!

I agree that both ending are just speculation on Hi's part, but it seems like a bit of cheat to offer us both possibilities, living vicariously through Nathan Jr. and getting kids of their own.

I adore Inside Llewyn Davis, but I did find the ending a little anticlimactic, although that's not necessarily bad. By the way, I think you're misreading it: I think that he only gets beaten up once, and the first time was just a flashforward (though it didn't feel like it at the time.)

@Unknown Hmm, I guess it's likely you're right about me misreading it in that way. I've only seen Inside Llewyn Davis once, so I guess I'll have to watch it again. Not such a bad fate!

P.S. I tagged you as "@Unknown" because when your comment was first posted, it was under that name . . .

You can always be sure to get plenty of comments when you're wrong. Keep cranking that wheel!