Storyteller’s Rulebook #206: Have a Reversible Metaphor 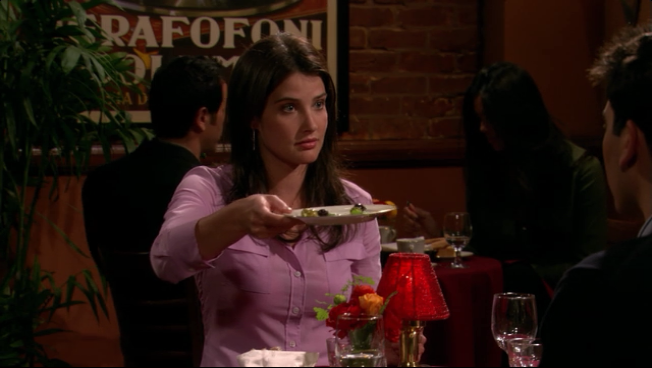 We’ve talked about how meaning can be expressed through reversible imagery, such as the different uses of the window imagery in Rise of the Planet of the Apes, but now let’s talk about a strictly-verbal equivalent, the reversible metaphor. In the pilot of “How I Met Your Mother”, one of Ted’s (many) flaws is his tendency to rely on self-satisfied grand theories of how love works, rather than going with the flow.

The pilot takes advantage of its unique point of view to trace the origin of one of those theories, and then cleverly turns it on its head. Ted believes that every relationship should have one person who loves olives and another who can’t stand them, and he bases this on his friends Marshall and Lily. Marshall has always given Lily his olives ever since their first date. Sure enough, now that Ted has met Robin, one of the things that convince him that she’s the love of his life is that she likes olives while he doesn’t.

…But once Marshall sees that Ted is once again letting his belief in fate make him overly-emotional (telling Robin he loves her on the first date), he finally tells Ted the truth: he actually does like olives, he just told Lily that he didn’t like them because he could tell she wanted his and he was on a first date…and he’s kept up the lie ever since. When Lily hears this, she’s briefly shocked but quickly adjusts, something that Ted keeps failing to do.

This reversal foreshadows the reveal at the end of the episode that Robin isn’t the wife, and also tips us off to Ted’s true flaw: that he substitutes ideas for observations and therefore gets both wrong.

I don’t know about you, but this happens to me all the time: I draw meaning from some formative incident or news story, only to discover later that I had the facts wrong and the opposite meaning was implied...and I often have to admit that the true meaning was one I wouldn’t have wanted to admit at the time, implying that I subconsciously fudged the facts in order to avoid it.

This is also good example of how any hero trying to synthesize the meaning of events onscreen should fail to do so, especially in TV, where irreconcilable flaws should persist for years. (Diane’s self-congratulatory speech at the end of the “Cheers” pilot fits into the same category.) Whenever Ted draws a moral from events, watch out, because he’s probably wrong…and that’s as it should be.
Posted by Matt Bird at 8:00 PM

Labels: Character, How I Met Your Mother, Storyteller's Rulebook, Theme

"I don’t know about you, but this happens to me all the time: I draw meaning from some formative incident or news story, only to discover later that I had the facts wrong and the opposite meaning was implied...and I often have to admit that the true meaning was one I wouldn’t have wanted to admit at the time, implying that I subconsciously fudged the facts in order to avoid it."

This reminds me of some dialogue from the final episode of TRUE DETECTIVE, about how we're all judging all the time whether we like it or not, whether we try and deny it or not -- and how maybe this high-minded judgement is nothing more than a distraction from our own base animal nature and our impending mortality.

And that's the problem for thinky people, isn't it? When our judgey default approach to the world gets it totally wrong we can still pat ourselves on the back by imagining that at least we're better than those who don't know enough or care enough to bother judging at all. Which is precisely why a theorist like Jacques Ellul ("Propaganda: The Formation of Men's Attitudes.") asserted that it was actually easier to propagandize to people who fancied themselves an educated, engaged citizenry.

I don't know, aren't judgments really just snap inferences we make based (more subconsciously than not) on previous experience?

I think there's a difference between "judgmental people" and making judgments. After all, sometimes our judgments are right and sometimes we know we need more information to formulate a judgment because we know something's amiss but we can't quite put a finger on it.

I'm not certain if it's a lack of self-awareness or sheer insecurity but that, at least I believe, is often the case with judgmental people. I don't think that's the case with people - and most people do this, "thinky" or not - who rush to judgment.