Rulebook Casefile: The Vainglorious Moment of Humanity in “How I Met Your Mother” 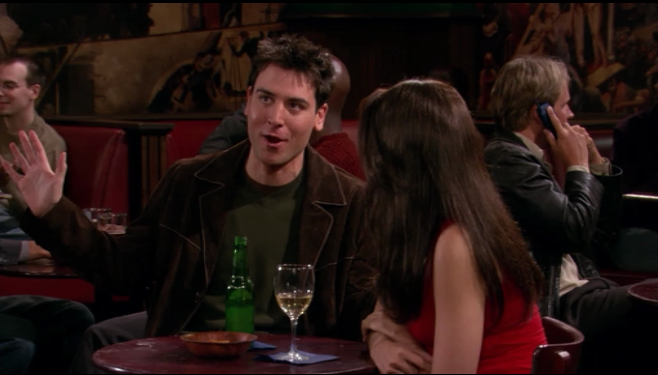 So if there are so many things wrong with Ted, why doesn’t the audience reject him right away? Well, let’s look for the moment of humanity. As in so many other areas, Ted also seems to fail this checklist item:
This leaves one more type of MOH that I added to both checklists a while ago but I’ve never mentioned elsewhere on the blog: the comically vain moment. The usually takes the form of exaggerated preening or mirror-prep that reminds us of our own vanities/insecurities, but here it takes a different form: a vainglorious vision of one’s own future. When Barney introduces Ted to a beautiful Lebanese girl, Ted quickly finds himself launching into this:
This is, in its way, appealing. This is an exaggerated version of something we all do. It’s telling that Ted’s MOH is of the laugh-at, not laugh-with variety, but it gets the job done: it establishes his vulnerability, his social problem, his inner flaw, and, yes, his charm, such as it is, all in one speech.
Posted by Matt Bird at 8:00 PM

A character on Friends came out with a similar timeline for life in the thirties -- complete with postponing marriage and children in order to meet the demands of those who book weddings.

I've really enjoyed the posts about HIMYM. With Ted's character, the issue mostly comes down to acting. I believe if you switched Jason Segal into Ted's role and vice-versa everyone would complain what a drip of a husband Marshall is.

I feel though that Ted has been the anti-Ross from Friends (who went from semi-cool nerd to freakshow over time). Ted's performance has improved through the seasons (and the writers for the show are amazing and have worked within his limits) so his character has become much more engaging.

That all being said, I do appreciate the writing insights you've presented of how to make the "everyman" character engaging.